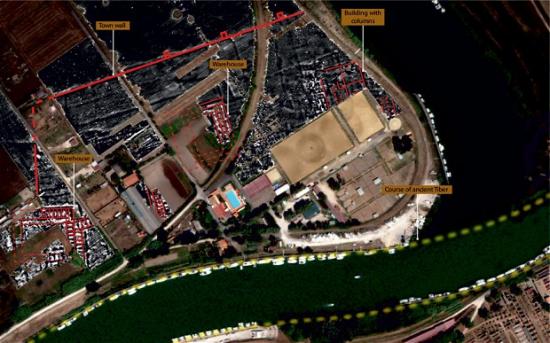 British scientists have discovered a new section of the boundary wall of the river port of ancient Rome which they say proves that the city was much larger than previously estimated Photo: PA

British scientists have discovered a new section of the boundary wall of the river port of ancient Rome which they say proves that the city was much larger than previously estimated.

Researchers from the universities of Southampton and Cambridge uncovered the extra section of the wall at Ostia while conducting a survey of an area between the port and another Roman port called Portus - both of which are about 30 miles from the Italian capital.

Scholars had thought the Tiber formed the northern edge of Ostia, but this new research, using geophysical survey techniques to examine the site, has shown that Ostia's city wall continued on the other side of the river.

The researchers have shown this newly discovered area enclosed three huge, previously unknown warehouses - the largest of which was the size of a football pitch.

Professor Simon Keay, director of the Portus Project, said: ''Our research not only increases the known area of the ancient city, but it also shows that the Tiber bisected Ostia, rather than defining its northern side.

''The presence of the warehouses along the northern bank of the river provides us with further evidence for the commercial activities that took place there in the first two centuries.''

The researchers have been using an established technique known as magnetometry, which involves systematically and rapidly scanning the landscape with small handheld instruments in order to identify localised magnetic anomalies relating to buried ancient structures. 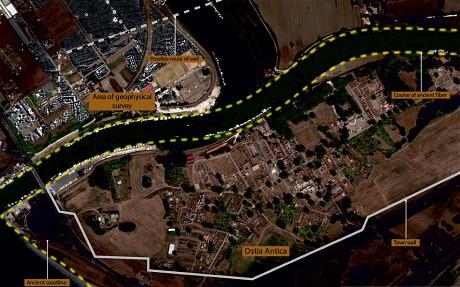 These are then mapped out with specialised computer software, providing images similar to aerial photographs, which can be interpreted by archaeologists.

In antiquity, the landscape in this recent study was known as the Isola Sacra and was surrounded by a major canal to the north, the river Tiber to the east and south, and the Tyrrhenian sea to the west.

At the southernmost side of the Isola Sacra, the geophysical survey revealed very clear evidence for the town wall of Roman Ostia, interspersed by large towers several metres thick, and running east to west for about half a kilometre. In an area close by, known to archaeologists as the Trastevere Ostiense, the team also found very clear evidence for at least four major buildings.

Prof Keay said: ''Three of these buildings were probably warehouses that are similar in layout to those that have been previously excavated at Ostia itself, however the newly discovered buildings seem to be much larger. In addition, there is a massive 142 metre by 110 metre fourth building - composed of rows of columns running from north to south, but whose function is unknown.

''Our results are of major importance for our understanding of Roman Ostia and the discoveries will lead to a major rethink of the topography of one of the iconic Roman cities in the Mediterranean.''

The work has been undertaken as part of the Southampton-led Portus Project, in collaboration with the British School at Rome and the Soprintendenza Speciale per i Beni Archeologici di Roma.