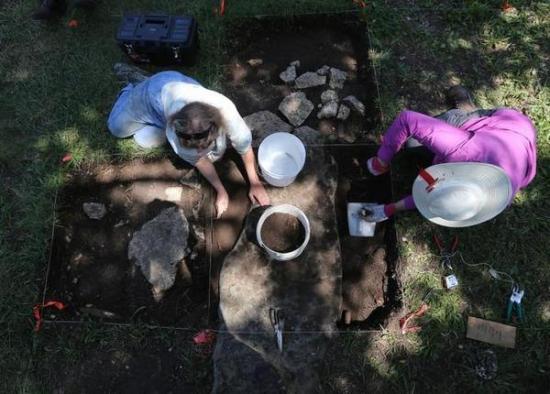 Volunteers work to excavate what is thought to be the foundation of the Samuel Adair family cabin in Osawatomie. Bo Rader/ The Wichita Eagle

Puddles of water line the driveway in this corner of Osawatomie, along with tents filled with volunteer archeologists scraping and sifting layers of dirt.

It was here 158 years ago that the beginnings of an abolitionist revolution were born, thanks to a man, his half-sister and her minister husband.

Samuel and Florella Brown Adair were just as adamant slavery was wrong but worked peacefully to seek resolution, allowing their house to be used along the Underground Railroad and providing refuge for runaway slaves and hunted abolitionist families.

A fork in almost pristine condition was found during the excavation of the Samuel Adair family cabin in Osawatomie. The cabin was bought in 1855 by Adair and his wife, Florella Brown Adair. Adair’s initials are on the fork. (June 11, 2014) Bo Rader/ The Wichita Eagle

In this yard at Adair Cabin, bits and pieces of the past are slowly emerging: a silver fork, a double-edged ax, hand-forged nails, animal bones, bullets, rifle cartridges and broken pieces of dishware.

For nearly four decades, the Kansas Anthropological Association and the Kansas State Historical Society have sponsored archeological digs to give amateurs and professionals a chance to learn about the earlier people who populated the Plains.

The annual digs are in locations across the state. Past digs have uncovered remnants of American Indian villages 500 to 800 years old, links of what could be chain mail of the type often worn by Spaniards, stone tools, arrowheads and Southwestern pottery shards.

But this dig in eastern Kansas, about 60 miles southwest of Kansas City, is different because it is attempting to help retell the story of the Bleeding Kansas period of Kansas’ past.

“It is being conducted like all archeology digs,” said Melanie Naden, one of the dig’s crew chiefs. “But in this case, we have a history.

Artifacts unearthed during the dig will be taken to Topeka for further study and possible museum displays.

At the dig site

On Wednesday afternoon, underneath trees lining what once was the Adair family yard, dozens of volunteers carefully scraped, sifted and explored archeological pits to see what early abolitionists left for the ages.

So far, one of the biggest discoveries is that the cabin was not located where historians thought it was. What was once thought the front door was really the back door.

And the most revealing? A trap door in what would have been the kitchen.

“We’ve got the smoking gun on the grassy knoll from a few items that are exactly of the time period,” said Christine Garst, lab archeologist for the Kansas State Historical Society. “The cabin wasn’t exactly where we thought it was. A garage is now sitting on what was the original one room.”

There has been speculation over what the trap door was used for, Naden said. Some historians think the Adairs did not use a kitchen until after the Civil War; all their cooking before then was done outdoors.

John Brown and his sons built the cabin’s addition, which would have been where the kitchen was located, Naden said. He also built the loft in the original cabin.

It was at this location, on Aug. 30, 1856, that the beginning sparks of the Civil War ignited. Florella Adair was seven months pregnant when she stood at the door of her tiny cabin and begged Missouri raiders for her life and the lives of the other woman and children who huddled inside.

“Please don’t kill us,” she begged. “Don’t burn the house down over us.”

The raiders spared their lives but not others.

In the Battle of Osawatomie, 250 pro-slavery fighters fought 30 abolitionists and raided and burned the town. Nearly a dozen men were killed or wounded.

On Wednesday, volunteers carefully carved out one layer of dirt after another, hoping to uncover more information.

“What we know is that the Adairs had a huge role in the Underground Railroad movement,” Naden said. “They were very quiet about it.

“John Brown got all the attention. He was out there and dramatic. But the Adair family does not get enough credit for having the tenacity to stay out here when neighbors on either side of a divisive issue are killing one another.”

Mary Florella Buster of Emporia has been a faithful volunteer at this year’s dig. She is the great-great-granddaughter of Florella Brown Adair.

Last week, she was in the dig’s lab when a silver fork was brought in from the dig site. It had been in the ground perhaps more than 150 years.

“I about jumped out of my skin,” Buster said. “I did not know this silver set existed. I have silver trays that were hers that have her initials.

“Being a member of the Adair family gives me a lot to live up to. I have fallen in love with Florella and Samuel. They were such strong believers that all men were created equally and literally sacrificed so much to come to the Kansas Territory.”

Florella Brown Adair died in 1865 at age 48. She came from Hudson, Ohio. Her and half-brother John’s father, Owen Brown, was founder of Oberlin College, which she attended before marrying Samuel Adair.

Once on the plains of Kansas, Florella gave birth to seven children, three who lived to adulthood.

Buster said her great-great-grandmother may have died from exhaustion.

“I took the fork and held it to my cheek,” Buster said. “I’ve never had to do anything like she did. I never had to stand at the door of my house and protect it from the enemy.”

When Kansas was opened as territorial land in 1854, five of John Brown’s sons came, bringing their families and a belief that Kansas should be a free state. Other abolitionists from the East also flooded the territory with the same hopes.

But because Kansas bordered the slave state of Missouri, tensions soon began to rise.

After the Brown family settled in the Osawatomie area, the politics of war became a reality for them. John Brown, already a fierce abolitionist, came to Kansas to help his sons.

At that time, the Kansas territory was under the control of a pro-slavery government that sometimes prompted free-state men – such as the Browns – to take action. They fought armed pro-slavery men – often Missourians – who invaded the territory, destroying crops and murdering those who believed in abolition.

Because of the conflicts and the bloodshed on both sides, the territorial period of Kansas from 1854 to 1861 is often called Bleeding Kansas.

The Adair Cabin in Osawatomie was built in 1854 and is enclosed within a huge stone pergola built in the 1920s at John Brown Memorial Park. In 1912, the cabin was moved from its original location about one mile west of Osawatomie.