A stone age burial chamber in Orkney has yielded a gruesome haul of more than 1,000 human bones, it was revealed yesterday. 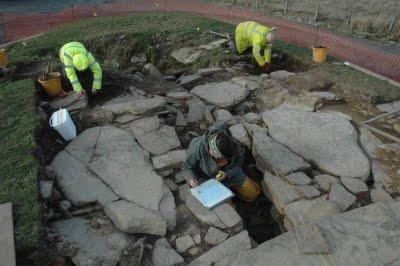 The burial chamber, also known as the Tomb of the Otters because large number of otter remains were also found there, was discovered last year by a local farmer working the land. In December, archaeologists recovered the remains of eight people from the tomb.

New research, in which two separate cells in the tomb were investigated, has almost doubled this number to at least 14, though it is very likely this number will end up much higher.

The bones were preserved in several layers on the bottom of the stone-lined cell, or cist, which were divided by layers of silt, which might indicate that the tomb had been used over different periods of time and fell out of use in the intervening years.

Archaeologists now hope that these finds will help them determine how long the tomb was in use. They also hope, through DNA research, to be able to discover more about the people who were buried there.

Team leader Dan Lee, projects officer with the Orkney Research Centre for Archaeology (Orca), said: "To find 1,000 human bones, and possibly as many as 2,000 - there are still layers and parts of the cell to fully uncover - in just one cell, is absolutely amazing.

"We have discovered an incredible assemblage of disarticulated human bones. All parts of the human skeleton were represented, including tiny bones such as finger bones, sternums and kneecaps.

"They covered all age ranges, from very young children, perhaps even babies, to adults.

"We have managed to identify 14 individuals, but it is very likely that this number will turn out to be much higher.

"This gives us a really good indication of what to expect in the tomb's other cells and an opportunity to study the people who lived and died in Orkney so many years ago.

"The next stage will be to fully excavate the passageway and the entrance, and we hope to get back to continue working on this fascinating piece of Stone Age archaeology.

"Unfortunately, because the conditions are changing inside as we've taken out the mud, silt and water, there is now a real danger that we're going to lose key information."

The archaeologists also hope to be able to get more information about the significance of the otter remains found in the tomb - if they have any.

Mr Lee added: "We've found otter droppings and bones, which proves that these animals have been using the tomb, and certainly the cell we've excavated, throughout the entire life and use of the tomb.

"It doesn't seem to have been a problem that the otters were living in this tomb at the same time as the Neolithic people that built it, or to those who later used it and buried their dead here.

"The otters used it as part of their territory - they basically used it as their toilet."

The Tomb of the Otters is just a few yards away from the larger Tomb of the Eagles, where remains of dozens of people were found.

Recent studies concluded that some of the people buried there may have suffered violent deaths.

There is no evidence that this was also the case for the people who found their last resting place in the Banks Tomb.

Mr Lee said: "We really can't say anything about the use of the Banks Tomb yet.

"There is no evidence that they died of violence, but we only excavated a small part of the tomb, and it is really hard to tell what we will find in the future."