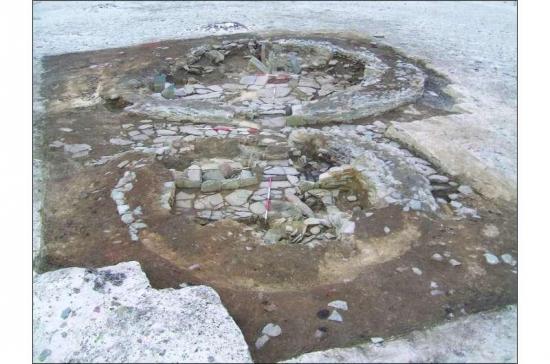 A team of researchers affiliated with the University of Huddersfield in England reports evidence suggesting that large numbers of women from the European continent migrated to the Orkney Islands during the Bronze Age. In their paper published in the journal Antiquity, the group describes their study of the remains of people buried in a Bronze Age cemetery on the island of Westray, one of the northernmost islands of Orkney.

Approximately 4,500 years ago, during the Bronze Age in Europe, people living on the Orkney Islands built a number of stone structures and burial chambers. Prior research has shown that the community of people that lived there made up a farming settlement. Such work has revealed multiple houses and other structures and also a cemetery. In this new effort, the researchers conducted DNA analysis of the bones in the cemetery to learn more about the people who lived there.

The researchers found that the cemetery was primarily the site of burial for just three extended families. They also found that males in the cemetery had long ties to the island or surrounding area. Females, on the other hand were more diverse. While there were some with local ties, many of them came from the European continent, suggesting they had migrated to the island. In the cemetery overall, the researchers found no divisions between genders, status or wealth. All of those buried there had apparently been treated the same. This finding, the researchers contend, suggests that the female migrants had been welcomed into the community. They found that the remains also suggested a relatively stable population on the island, which hints at the possibility that some of the people born there left when they were able to do so.

The researchers also suggest that the migrating women likely brought aspects of their culture with them. Some, for example, were likely Beaker people from some of the milder parts of Europe—such groups were known for their close community ties and advanced agricultural techniques, which could have spilled over to communities on Orkney as the women moved there.