During the sixties of the 20th century, a statue of a bull dedicated to the Greek god Orion was discovered in Younan Mountain near the town of Bloudan in Damascus Countryside. 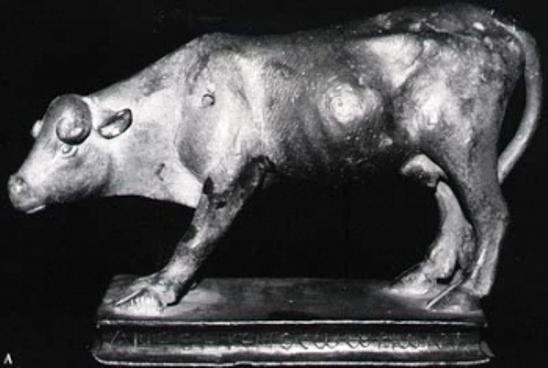 The state bore Greek inscriptions stating that the statue is an offering to Orion from an ancient warrior named Tamanaius.

Orion is a mythical figure whose origin various according to the several stories. One story tells that the gods Zeus, Hermes and Poseidon come to visit a man named Hyrieus who roasts a whole bull for them, and when they offer him a favor, he asks for the birth of sons, and thus Orion is born.

Other stories say that he is the son of the sea god Poseidon, and that he had incredible strength and beauty and excelled at hunting wild beasts, hence his title of "Hunter."

In one story, Orion fell in love with the daughter of a king and seduced her, prompting the king to blind him. Orion journeyed to the distant east so that the rays of the sun can restore his sight. Afterwards, he accompanied the goddess of the hunt Artemis.

Archaeological finds in a Roman temple found in 2009 suggest that the legend may have originated somewhere around the mountains of Bloudan, particularly Younan Mountain, and later the myth reached Greece and was incorporated into the Greek myth cycle.

Younan Mountain is located 6 kilometers northeast of Bloudan and is 2100 meters high. Three dilapidated ancient structures were uncovered on the western peak of the mountain and near the northern and western slopes.

Excavations at the westernmost of the structures uncovered a pedestal that is believed to have been either a sacrificial altar or a beacon used for guarding the site. These remains are believed to be part of a temple dating back to the Roman era.

So far, work in the central structure focused on the areas surrounding it, as the rubble of the structure itself makes it impossible to excavate until it is gradually approached from every side.

The easternmost structure dates back to the Byzantine era, and was probably a monastery constructed from stones taken from the other two structures. This structure contained the most important finds in the site, including bronze coins dating back to the 4th and 5th centuries AD, iron and bronze arrowheads and spearheads, in addition to nails and other metal artefacts.

Part of the mountain was recently given to the Greek Orthodox Patriarchate which intends to rehabilitate the monastery's site by building a new church there and a number of services facilities near the archaeological site, all of which will be constructed to suit the nature of the site and allow people easy access to the site.
(SANA)