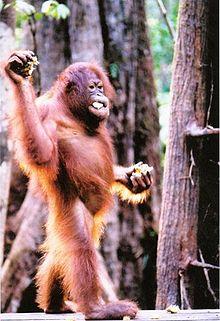 Appearing this week in the scientific journal PLOS ONE the research shows that orang-utans, and perhaps other great apes as well, can learn to produce new calls which display similarities with human consonants and vowels.

The study was led by Adriano Lameira from the Pongo Foundation. He explained the findings:

These calls were produced by quickly opening-and-closing the lips, much alike humans do when talking. One of these calls presented similarities with human consonants, and the other with human vowels, the two basic building blocks of human speech.

Speech underlines every social and community structure in human society, yet the origin of all the worlds spoken languages remains a puzzle ever since the publication of Darwins theory of natural selection. The major barrier for our understanding of the evolution of spoken language is the observation that great apes  our closest relatives  exhibit a very rigid use of their calls, and seem to lack the capacity to modify or learn new calls into their repertoire. This stands in stark contrast with human spoken languages, which are learned anew every generation, raising therefore critical questions about evolutionary continuity between our vocal repertoire and that of great apes. The new findings changes all of this as we can now see fundamental similarities.

"This research highlights that studying orang-utan calls is very relevant to our understanding of the evolution of the production of human speech. Orang-utans seem to have more capabilities to learn and produce calls than we assumed several years ago. This indicated how important studies are that examine calls in this relatively silent ape species."