A team of archaeologists working at the site of Oplontis, which was destroyed along with Pompeii and Herculaneum on August 24, 79 AD, have just published a series of 3D scans of Roman skeletons. By digitizing individual skulls and the skeletons of more than a dozen people who lay where they died more than two millennia ago, the archaeologists hope to clarify the processes by which the people were killed and reconstruct what their lives - and faces - looked like.

Thousands of people died in the Bay of Naples area in the first century AD when Mt. Vesuvius erupted. Over the course of two days, many escaped, but others - unable to leave or unsure whether it was necessary - perished in this environmental catastrophe. Pompeii is the most famous of the towns affected; thousands of people's remains were found, and dozens were made into casts in the 19th century. More recent research has uncovered hundreds of skeletons at Herculaneum in shoreline buildings, presumably people hoping to be rescued by the Roman navy. Other outlying villa sites were also affected by Vesuvius. Large, palatial estates - places like Stabiae and Oplontis - were also covered by ash, pumice, and mud.

Oplontis, within easy walking distance of Pompeii, was composed of a large, wealthy villa that was unoccupied at the time of the Vesuvian eruption, as well as a series of structures that appear to have been an import-export wine business. In the 1980s, archaeologists discovered more than 50 bodies in one room of the Oplontis business, also potentially awaiting a sea rescue. This summer, I led a team of archaeologists in excavating the remaining bodies, analyzing them osteologically, and making 3D scans of complete skulls, which are newly available at the website FacesofOplontis.com. 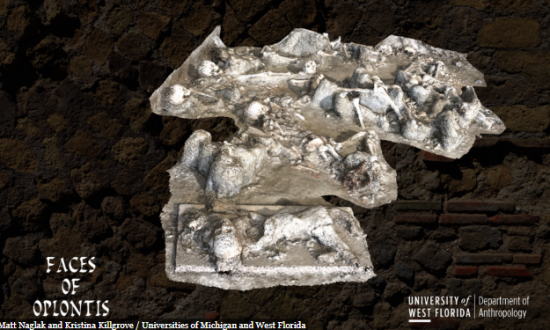 Photogrammetric model of skeletons in situ in Oplontis B, Room 10.

Prior to excavation, we created a 3D photogrammetric model of the people who died in Room 10 of Oplontis B. This effort was led by Matt Naglak, a graduate student at the University of Michigan, who produced the model seen above. All of these individuals are still in the place they died, except the two in the front, who were partially cast and placed on a board.

The photogrammetry is allowing us to investigate the stratigraphy of the bodies -- namely, who may have died in what order and how they might have died. Herculaneum, for example, was overcome by a massive wave of mud, while Pompeii was hit by pumice. The mechanism of death at Oplontis is less clear, and 3D photogrammetry and osteological analysis are two ways my team and I are attempting to resolve this question.

3D scans of the skulls were done using the hand-held Sense scanner, which is lightweight and easier to bring onto an archaeological site than a NextEngine or other table-top scanner.

Skull M below is an example of my team's digitization of an important individual. This skull comes from a young adult female (around 25-30 years old at the time of her death), and the annotated model, accessible at the new website, shows that she had a healed blunt force trauma to the top of her head. More interestingly, this woman was about 36 weeks pregnant when she died, and owing to the excellent preservation, I found nearly all the bones of her fetus during excavation.

Skull from Individual M from Oplontis B (Italy, 79 AD) 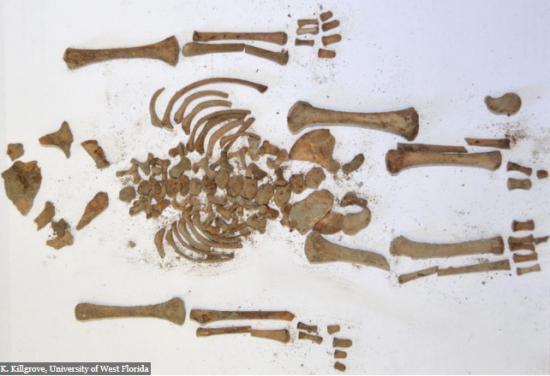 Skeleton of a 36-week-old fetus found in the abdominal cavity of a young female from Oplontis B.

This project on the Oplontis skeletons is an attempt to digitally preserve important Italian/Roman cultural heritage, as well as to answer research questions about who these people were. Very little is known historically about this site, but the Oplontis business was clearly bustling before the deadly volcanic eruption. The collection of skeletons is incredibly useful for understanding the ancient Roman world at the beginning of the Empire because it represents a cross-section of people cut down in their prime, unlike a cemetery that holds the remains of people who most often died of disease.

Although future work is planned on samples from the skeletons to investigate diet, migration patterns, and pathogen DNA, one immediate concern is who these people were. Forensic facial reconstruction is underway, utilizing the 3D scans to re-create what the people who died at Oplontis two millennia ago might have looked like, and a 3D reconstruction of the scene from the photogrammetric model is also planned.

The unveiling of the Faces of Oplontis website will hopefully encourage additional digitization of Vesuvian skeletal remains and add to a growing collection of osteological data from the early stages of the Roman Empire.