A MATLAB based orientation analysis of Acheulean handaxe accumulations in Olorgesailie and Kariandusi, Kenya Rift

The Pleistocene archeological record in East Africa has revealed unusual accumulations of Acheulean handaxes at prehistoric sites. In particular, there has been intensive debate concerning whether the artifact accumulation at the Middle Pleistocene Olorgesailie (Southern Kenya Rift) and Kariandusi (Central Kenya Rift) sites were a result of fluvial reworking or of in situ deposition by hominids. We used a two-step approach to test the hypothesis of fluvial reworking. Firstly, the behavior of handaxes in water currents was investigated in a current flume and the flow threshold required to reorientate the handaxes was determined. The results of these experiments suggested that, in relatively high energy and non-steady flow conditions, handaxes will reorientate themselves perpendicular to the current direction. Secondly, an automated image analysis routine was developed and applied to archeological plans from three Acheulean sites, two at Olorgesailie and one at Kariandusi, in order to determine the orientations of the handaxes. A Rayleigh test was then applied to the orientation data to test for a preferred orientation. The results revealed that the handaxes at the Upper Kariandusi Site and the Olorgesailie Main Site Mid Trench had a preferential orientation, suggesting reworking by a paleocurrent. The handaxes from the Olorgesailie Main Site H/6A, however, appeared to be randomly oriented and in situ deposition by the producers therefore remains a possibility. 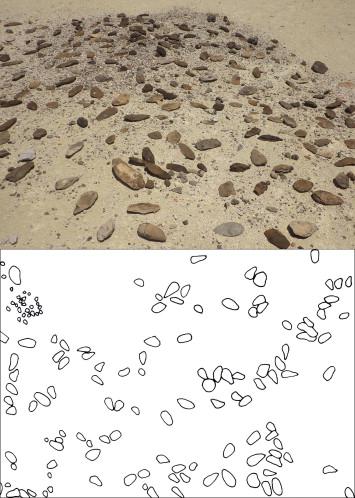 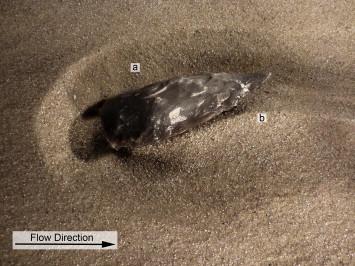 Figure 2. Formation of (a) scour, and (b) sediment ridge (with upstream tilting of the artifact) in the flume channel, under a steady flow of water. 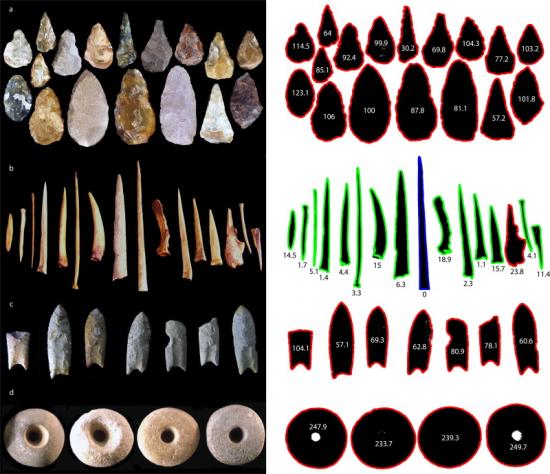 Figure 9. Photos of stone tools were distinguished from the background and recognized by applying the introduced image analysis routine. Objects that were successfully recognized are marked in green, while those marked in red were not recognized because their shapes were too different from the reference object, which is marked in blue. The numbers within or beneath the objects are the outputs of the dis variable, representing the difference in shape from the reference object. A low number means a high level of similarity to the reference object. Photos reproduced with permission from http://lithiccastinglab.com (a + d), http://millenniareproductions.com (b), and http://wikimedia.org (c). (For interpretation of the references to color in this figure legend, the reader is referred to the web version of this article.)