Olèrdola (Espagne): The first Prehistoric Iberian twins have been found

Researchers at the Autonomous University of Barcelona (UAB) have discovered the remains of newborn twin girls in the archaeological site of Olèrdola in Barcelona. They date back to between the middle of the 4th century B.C. to the beginning of the 2nd century B.C. The findings are the first bone remains of twins to be recorded.
"This is the first documented case in the Iberian Peninsula. There has been much talk of possible twins but never has sufficient data been gathered in the field to determine whether findings belong to the same chronological moment in time, nor has data ever been found on the same stratigraphic level to guarantee with such certainty like in this instance," as explained to SINC by Eulalia Subira, researcher at the UAB and coauthor of the study published in the International Journal of Osteoarchaeology. 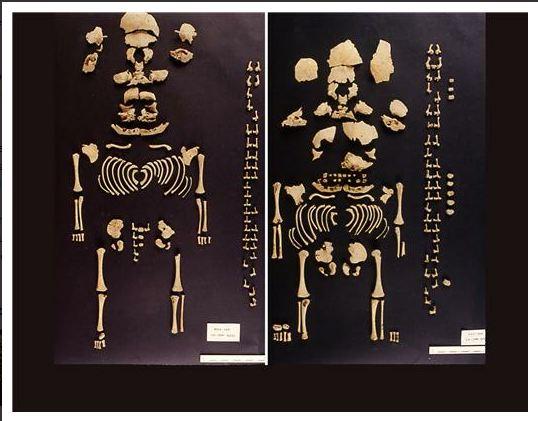 Image of individual OL-2000-8245 (right) and OL-2000-8246 (left) in the grave. Image: N. Molist.
The remains were found in the archaeological site of Sant Miquel d'Olèrdola in Catalonia and it is expected that they belong to two girls between 38 and 40 weeks of gestation who were buried at the same time in the same grave with their legs entwined.
According to the study, "none of the bone remains show pathological evidence of the cause of death but it could have been a consequence of difficult pregnancy or childbirth. Lack of sufficient hygiene could have lead to infant and maternal mortality in Prehistoric times."
In order to test this finding, scientists used forensic anthropology methods, first determining the age and sex. "The specialist carrying out such assessment was 'blind'. In other words, she was not told at any time that both individuals were found next to each other or that they could be twins."
The age of the twins was estimated by taking the tooth germs, the length of the bones and the state of ossification. In addition, experts used photographs of the site to see whether they had been buried at the same time or not, they spoke with archaeologists, who indicated that the two remains had been found in the same grave, and they studied the planimetries.
Subirà points out that "they also carried out DNA analysis but it was not possible to obtain DNA data on one of the individuals despite repeating sampling taking and analysis."
Children buried near to their mothers
This discovery offers new information to the numerous documented cases of child burials during the Iberian Age, when perinatal children were not buried in cemeteries.
"The Olèrdola archaeological site is itself very interesting. It has always been said that throughout the Iberian Age newly born children were not buried in cemeteries. In this case, they were found in a skin tanning and dying area: in other words, a space dedicated to work," points out Subirà.
For the researcher, finding newly born children buried in a work area could indicate that it was where the mothers used to work. This provides information on society and the attachment relationship that parents had with deceased newly born children.
"Recognition of this type of burial will be of great assistance in the future when it comes to interpreting the socio-cultural impact of the arrival of twins in a pre or proto-historic population, their treatment and their life expectancy. We are currently working in the same archaeological site but on more recent remains," as the researcher concludes.