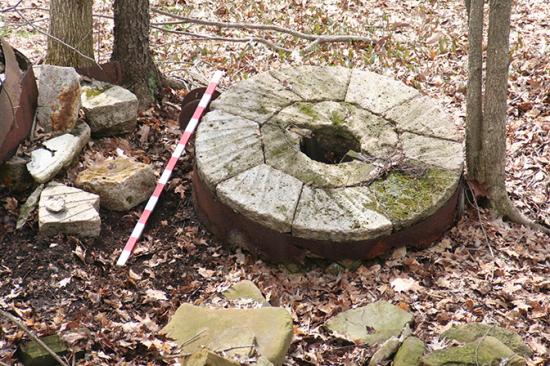 Millstone made of French buhr at the site of Clover Hill Mill, Trumbull County, Ohio. © SEPM

A geologist studied fossils to confirm that stones used in 19th century Ohio grain mills originated from France. Fossils embedded in these millstones were analyzed to determine that stones known as French buhr were imported from regions near Paris, France, to Ohio in the United States. Dr. Joseph Hannibal, curator of invertebrate paleontology at The Cleveland Museum of Natural History, was lead author on research published in the Society for Sedimentary Geology journal PALAIOS.

The study documents a technique that uses fossils to definitively distinguish French buhr from similar-looking Ohio chert (also known as flint). The most revealing fossil is a one-millimeter wide reproductive structure of a charophyte (a type of algae also known as a stonewort) that occurs in the rocks of the Paris Basin, a geological province centered around Paris, France. 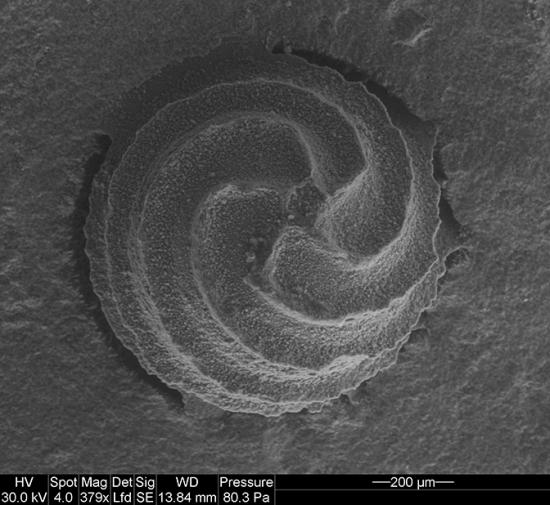 Magnified view of reproductive structure of charophyte algae from a French buhr millstone from Duncan Grist Mill, Killbuck, Ohio. © SEPM
Millstones made of Ohio chert were found to contain typical saltwater marine fossils that are much older than the fossils found in French buhr. These include brachiopods and small oval fossils called fusulinids. These Ohio rocks date from the latter part of the Paleozoic era (about 300 million years ago). Alternatively, the French stone is made from rock derived from freshwater deposits. The fossils found in this stone include freshwater snails and algae. The French stone dates from the Tertiary Period (from 65 to 2.6 million years ago), which is geologically younger than the Ohio stone.

Detail of charophyte algae found in a French buhr millstone from Duncan Grist Mill, Killbuck, Ohio. © SEPM
“The story of the importation of this stone from France is not widely known,” said Dr. Joseph Hannibal, curator of invertebrate paleontology at The Cleveland Museum of Natural History. “They are not always correctly identified as being from France. Based on the stones we have examined, it is clear that the French stone was more popular. Examples of millstones made of this stone are widespread in North America and throughout the world. So the use of fossils for their identification is a broadly applicable concept.” 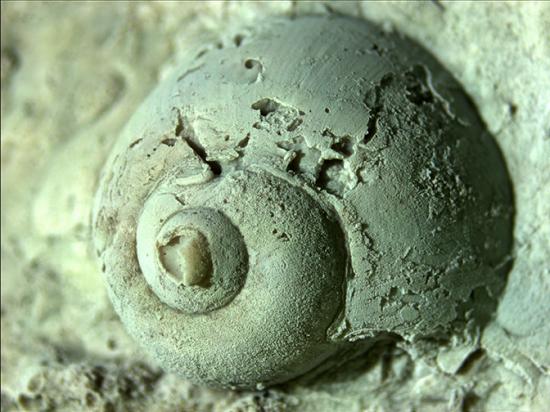 Latex impression of a freshwater snail found in a French buhr millstone at Lanterman’s Mill, Youngstown, Ohio. © SEPM
During the late 18th and 19th century, large amounts of stone known as French buhr were imported from France to Ohio and other states in North America for the manufacture of millstones. The French stone was preferred by grain millers over locally found stone because it was considered superior in cutting grain that sifted more easily to produce white flour. The Ohio cities of Cleveland and Cincinnati were major centers for manufacture of millstones made of this French stone. However, local Ohio stone, some of it similar in color and texture to the French stone, was quarried in eastern and southeastern Ohio at localities including the famous locality of Flint Ridge.

“Many millstones have been identified as being made of French stone or Ohio stone,” said Hannibal. “But since the stones used are generally similar in color and other properties, I questioned how these stones had been identified as originating from France or Ohio. When visiting the remains of an old mill in Trumbull County, Ohio, we first noticed that there were charophytes in some millstones. Our study progressed from there.”

The study was done over a period of five years. The research team searched 60 millstone sites, looking at several hundred millstones. A total of 16 millstones containing fossils were included in the study. The research team, which included college students and high school students, analyzed wafer thin samples of rock under microscopes. The team also applied liquid rubber latex to stone surfaces to obtain impressions of fossils such as snails for investigation. Four college students, two from Kent State University, one from Heidelberg University, and one from Oberlin College, are coauthors of this study.

The study is ongoing and is part of a broader research project on the geology of millstones and the trans-Atlantic stone trade. Millstones in about 30 Ohio counties have been studied to date as part of this larger project.