Adena groups had own burial practices

The Adena culture occupied Ohio and neighboring parts of West Virginia, Kentucky and Indiana from around 800 B.C. to A.D. 100. Their conical burial mounds and circular enclosures represent the beginnings of monumental architecture in the region. 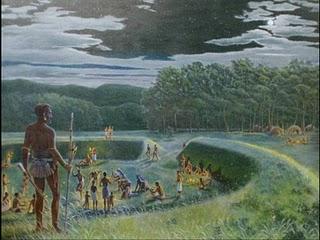 Christopher Hays, an archaeologist at the University of Wisconsin, Washington County, studied Adena mortuary patterns in central Ohio. His results appeared in the Summer 2010 issue of the journal Southeastern Archaeology.

He examined nine sites within about 12 miles of Columbus, including five mound sites in the Alum Creek drainage area and four in the Columbus area - two along Big Walnut Creek, one near the Scioto River and one along the Olentangy River.

All had been excavated as salvage projects by the Ohio Historical Society between 1950 and 1970, so the collections were available for reanalysis.

Hays identified distinctive patterns of mortuary practices in the two regions that he links to differences in geography.

In the north, the traces of Adena rituals found in the Alum Creek mounds were highly consistent. Post-molds found at the base of some mounds indicate the initial rituals took place within a wooden house-like structure.

At the conclusion of these ceremonies, the Adena people dismantled the structure and covered the site with a mound of earth. There were no formal burials in the mounds, but archaeologists did recover fragments of cremated human bones and a few artifacts.

In contrast, the four Columbus sites exhibited considerable diversity in mortuary practices. Although most of these mounds covered formal, prepared burials, the locations of the burial within the mound and the kinds of artifacts buried with the honored dead varied widely.

Hays argued that there are enough similarities between the Alum Creek and Columbus sites to suggest that the Adena people in both areas shared a common set of beliefs, but religious leaders in each region interpreted and enacted those beliefs in different ways.

The Alum Creek sites were more secluded and served smaller communities. There likely was a small number of spiritual leaders and there might have been few visitors to introduce new ways of doing things.

The Columbus sites were more centrally located along major transportation routes that opened these communities to a regular influx of new ideas. The larger floodplain supported more farms, which could feed larger numbers of people. That could in turn support more spiritual leaders, each offering his own spin on the traditional mortuary rites.

Hays concluded that there was no overarching Adena mortuary tradition. Instead, numerous quasi-independent groups drew upon a common set of basic beliefs and symbols to develop their own regionally distinctive mortuary traditions.

This isn't all that different from contemporary religious denominations, which tend to be more conservative in rural areas and more open to innovation in urban settings.

Sometime around 100 B.C., one of the Adena denominations in the Scioto Valley emerged from the ferment of innovation in this region as the explosion of mortuary ceremonialism we know as the Hopewell culture.

Their extraordinary mounds and enclosures, including those at Newark and Fort Ancient, represent the pinnacle of monumental earthen architecture in the Ohio Valley.

Bradley T. Lepper is curator of archaeology at the Ohio Historical Society.