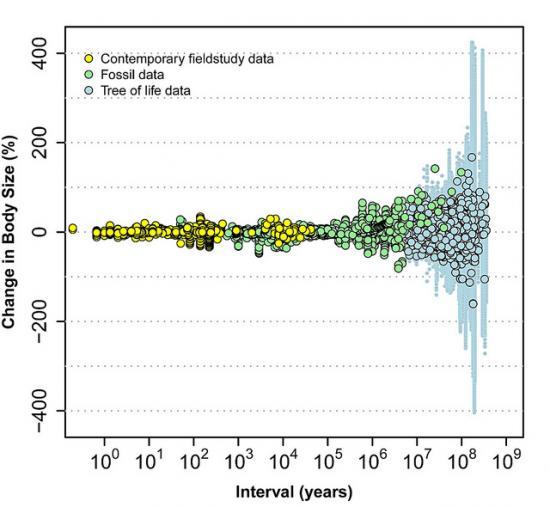 As this graph shows, significant changes in body size - one evolutionary trait that can be tracked through the fossil record - take about one million years before major changes accumulate and persist. (Graphic courtesy of Oregon State University)

In research that will help address a long-running debate and apparent contradiction between short- and long-term evolutionary change, scientists have discovered that although evolution is a constant and sometimes rapid process, the changes that hit and stick tend to take a long time.

Give or take a little, one million years seems to be the magic number.

A new study, published this week in Proceedings of the National Academy of Sciences, combined for the first time data from short periods such as 10-100 years with much longer evidence found in the fossil record over millions of years.

It determined that rapid changes in local populations often don't continue, stand the test of time or spread through a species.

In other words, just because humans are two or three inches taller now than they were 200 years ago, it doesn't mean that process will continue and we'll be two or three feet taller in 2,000 years. Or even as tall in one million years as we are now.

"Rapid evolution is clearly a reality over fairly short time periods, sometimes just a few generations," said Josef Uyeda, lead author of the study and a zoologist at Oregon State University. "But those rapid changes do not always persist and may be confined to small populations. For reasons that are not completely clear, the data show the long-term dynamics of evolution to be quite slow."

Across a broad range of species, the research found that for a major change to persist and for changes to accumulate, it took about one million years. The researchers wrote that this occurred repeatedly in a "remarkably consistent pattern."

Long periods of little change, Uyeda said, are called "stasis," a pattern that originally led to the concept of "punctuated equilibrium," controversial when it was first proposed in the early 1970s. This research supports the overall pattern of stasis and punctuational change. However, Uyeda says there may be different causal mechanisms at work than have often been proposed.

"We believe that for changes to persist, the underlying force that caused them has to also persist and be widespread," Uyeda said.

"This isn't just some chance genetic mutation that takes over," he said. "Evolutionary adaptations are caused by some force of natural selection such as environmental change, predation or anthropogenic disturbance, and these forces have to continue and become widespread for the change to persist and accumulate. That's slower and more rare than one might think."

Though slow, however, the process appears to be relentless. Most species change so much that they rarely ever last more than 1-10 million years before going extinct, or developing into a new species, the scientists noted.

The exact cause of these long-term, persistent evolutionary changes is not certain. The scientists said that climate change, in itself, does not appear to be a driving force, because many species have remained substantially unchanged over time periods when climates changed dramatically.

This study is one of the first of its type to help reconcile the rapid evolution seen by biologists in contemporary species; the slow, stable changes observed by paleontologists; and dramatic, macroevolutionary differences in body sizes.