Centres of royal power: New findings about the realms of medieval itinerant kings

The Research Council of Norway

In the 900-1000s the power of the monarch in Norway was consolidated through the establishment of a new system of royal estates. Similar systems can also be found in other Northern European countries.

Kingston, Husebygård, Königshof. These three terms in English, Norwegian and German all describe the same thing: royal farmsteads that together formed a network and belonged to the early “state.”

In Norway we know of some 50 royal estates of this kind. In addition, there is knowledge of some thirty or so farmsteads dating back to before the year 1130 that were the kings’ own inherited property.

Kings such as the legendary Harald Fairhair, who gained control over large parts of Norway in the ninth century, travelled between the different royal estates. Thus, through their physical presence, the kings managed to control and govern larger kingdoms than previous Norwegian kings had done.

Harald Fairhair was one of medieval Norway’s itinerant kings. Here depicted in the Icelandic Flatey Book from the 1300s.

With financing from the Research Council’s funding scheme for independent projects and in cooperation with colleagues in Sweden, Denmark, England and Germany, archaeologist Frode Iversen has shown how fundamental this system of royal estates and the king’s travels between the royal residences were for early state formation in Northern Europe.

In the research project Rike og provins (“Kingdom and province”) 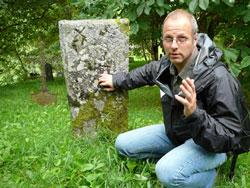 Archaeologist Frode Iversen at the royal estate in Seim.

Dr Iversen and his colleagues have identified a set of common features in the way the kingdoms of the Northern European countries were governed in the early Middle Ages.

“The system of establishing a network of royal estates emerged as a new phenomenon in Northern Europe in the 500s. The system reached Norway a few hundred years later, making it possible for a king to control larger areas than had previously been the custom. Gradually a new type of estate, the husebygårdene , emerged. These are found in Norway, Sweden and Denmark, and we think they served as collection sites for fines and levies to the state. These were, perhaps, the first ‘tax offices’,” states Dr Iversen.

Assets for the king

The largest of the “network” kingdoms in medieval Europe was that of Charlemagne (742-812), whose kingdom extended over large parts of Western Europe. Here, too, a strategy of developing royal estates in the areas furthest from the centre was employed to hold the kingdom together. Another well known example can be found in England, where seven Anglo-Saxon kings in succession were crowned at Kingston-upon-Thames. Thus they gained access to the state residences, in addition to maintaining ownership of their own family holdings. 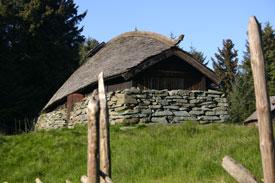 Avaldsnes is one of the 35 Norwegian royal estates we know of. Here St. Olav’s Church at Avaldsnes. (Photo: Wikimedia)

“The system whereby several royal estates belonged to the same king is common knowledge. What is new about our project is that we have been able to show how these kingdoms worked in practice. We have developed a mapping system that shows the physical structures in the areas around the royal estates,” explains Dr Iversen.

The project has enabled the researchers to clearly identify the estates owned by the Norwegian kings around a thousand years ago. On the basis of this Dr Iversen has been able to determine what the centres of royal power were at the time.

Dr Iversen’s colleagues in Sweden, Denmark, Germany and England have undertaken a similar mapping of the itinerant kingdoms of the early Middle Ages in their respective countries.

Among the exciting results of the project are clear patterns, in particular road maps, that show how the different royal estates were positioned. The researchers have established that all the royal estates studied in the five countries were situated near the most important transport arteries of the time. This tells us that the king used the positioning of the royal estates as a means of controlling his kingdom.

In Western Norway we see, for example, how Harald Fairhair and other kings from the area sought to control the shipping routes by placing royal estates at places such as Utstein and Avaldsnes.

A hub of activity

Whenever the king himself was in attendance, the royal estate and the surrounding area became a hub of intense activity. New work was undertaken and markets and court cases were held. When the king left the level of activity decreased again. In this way, the regents themselves became the centre of these kingdoms that had no capital.

“This has been an extremely enjoyable research project, not only because the royal estates are among the most beautiful in Northern Europe, but also because we have found such clear patterns that come up again and again both in Norway and in the other countries,” states an enthusiastic Dr Iversen.

While the project was underway Dr Iversen was employed at the University of Bergen. At present he is Head of the Department of Archaeology at the Museum of Cultural History, University of Oslo.

EU funding for a new project

In many ways, Dr Iversen’s methods represent a pioneering approach in this branch of archaeology. Whereas the focus previously has primarily been on studying country estates with an emphasis on building technology, Dr Iversen and his colleagues have looked at these estates in the context of their physical and social surroundings.

As a result of the success of the collaborative effort between Dr Iversen and his international colleagues, Dr Iversen has now received a grant from the EU’s HERA (Humanities in the European Research Area) Joint Research Programme to embark on a new project – together with many of the same colleagues. The new project will focus on the first systems of governance in Northern Europe.

“The funding I received as a postdoctoral fellow from the Research Council’s funding scheme for independent projects was crucial for my research activities. Without it I would not have been able to set in motion the joint project with my international colleagues. Nor would I have been given the opportunity to carry out the new EU-funded project,” Dr Iversen concludes.

More information about the projects can be found here: