While most of the ship's wood has long since disintegrated, copper that sheathed the hull beneath the waterline as a protection against marine-boring organisms remains, leaving a copper shell retaining the form of the ship. The copper has turned green due to oxidation and chemical processes over more than a century on the seafloor. Oxidized copper sheathing and possible draft marks are visible on the bow of the ship.

During a recent Gulf of Mexico expedition, NOAA, BOEM and partners discovered an historic wooden-hulled vessel which is believed to have sunk as long as 200 years ago. Scientists on board the NOAA Ship Okeanos Explorer  used underwater robots with lights and high definition cameras to view remnants of the ship laden with anchors, navigational instruments, glass bottles, ceramic plates, cannons, and boxes of muskets.

Equipped with telepresence technology,Okeanos Explorer reached audiences around the world who participated in the expedition through live streaming Internet video. As members of the public ashore watched live video from the ocean bottom, they became “citizen explorers,” sharing in the discovery with maritime archaeologists, scientists and resource managers from a variety of federal, academic, and private organizations.

The NOAA-funded 56-day expedition that ended April 29 was exploring poorly known regions of the Gulf, mapping and imaging unknown or little-known features and habitats, developing and testing a method to measure the rate that gas rises from naturally-occurring seeps on the seafloor, and investigating potential shipwreck sites. 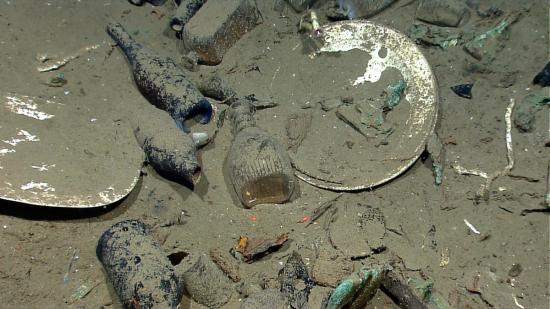 A variety of artifacts inside the ship's hull relates either to daily life on board or to the ship’s cargo. Artifacts include ceramic plates, platters, and bowls; and glass liquor, wine, medicine, and food storage bottles of many shapes and colors (some with the contents still sealed inside).

The shipwreck site was originally identified as an unknown sonar contact during a 2011 oil and gas survey for Shell Oil Company. The Department of Interior’s Bureau of Ocean Energy Management (BOEM) requested this and other potential shipwreck sites be investigated during NOAA’s Gulf of Mexico expedition. Surveys and archaeological assessments are required by BOEM to aid in its decision-making prior to issuing permits for bottom-disturbing activities related to oil and gas exploration and development.

“Artifacts in and around the wreck and the hull’s copper sheathing may date the vessel to the early to mid-19th century,” said Jack Irion, Ph.D., a maritime archaeologist with BOEM. “Some of the more datable objects include what appears to be a type of ceramic plate that was popular between 1800 and 1830, and a wide variety of glass bottles. A rare ship’s stove on the site is one of only a handful of surviving examples in the world and the second one found on a shipwreck in the Gulf of Mexico.”

Significant historical events occurring in the regions around the Gulf of Mexico during this time include the War of 1812, events leading to the Texas Revolution, and the Mexican-American War, he said.

“Shipwrecks help to fill in some of the unwritten pages of history,” said Frank Cantelas, a maritime archaeologist with NOAA’s Office of Ocean Exploration and Research . “We explored four shipwrecks during this expedition and I believe this wreck was by far the most interesting and historic. The site is nearly 200 miles off the Gulf coast in over 4,000 feet of water in a relatively unexplored area.”

The expedition also discovered areas exhibiting rich biodiversity. At the base of the West Florida Escarpment, a steep undersea cliff, explorers found a “forest” of deep corals, several of which were new to scientists on the ship and ashore. For several days the expedition team also imaged deep-coral communities in the vicinity of the Macondo oil spill site. On another part of the expedition, team members designed and installed a device on the ship’s undersea robot system, or ROV (remotely-operated vehicle), to measure the rate that gas rises in the water column.

“Testing new methods and technologies is a priority,” said Tim Arcano, director of NOAA’s Office of Ocean Exploration and Research. “We plan for ocean exploration to foster both follow-on research, and develop new technologies to help ocean resource managers and others better understand, use, and protect our largely unknown ocean and its resources.”

An anemone lives on top of a musket that lies across a whole group of muskets at the site of the shipwreck.

Okeanos Explorer is equipped with: a state-of-the-art multibeam mapping sonar; the Institute for Exploration’s Little Hercules ROV, which made 29 dives; and telepresence technology that uses satellite and high-speed Internet pathways between ship and shore, allowing scientists ashore to participate in the mission in real-time, and general audiences to be “citizen explorers” as the mission unfolds, live.

The NOAA Ocean Exploration Program is the only federal program dedicated to systematic exploration of the planet’s largely unknown ocean. NOAA Ship Okeanos Explorer is operated, managed and maintained by NOAA’s Office of Marine and Aviation Operations  which includes commissioned officers of the NOAA Corps and civilian wage mariners. NOAA’s Office of Ocean Exploration and Research operates, manages and maintains the cutting-edge ocean exploration systems on the vessel and ashore.

NOAA’s mission is to understand and predict changes in the Earth's environment, from the depths of the ocean to the surface of the sun, and to conserve and manage our coastal and marine resources.

A map produced by NOAA Ship Okeanos Explorer's sonar shows the West Florida Escarpment, a steep undersea cliff. The base of the escarpment (2,600 meters deep) is shown in blue with the upper rim more than 600 meters above. ROV dives explored the physical structure of the seafloor and biodiversity on soft and hard bottom areas.

NOAA's Seirios Camera Platform, operating above theLittle Hercules ROV, images the ROV and an anchor inside the hull of a copper-sheathed shipwreck in the Gulf of Mexico. The wood has nearly all disintegrated after more than a century on the seafloor.