North Europeans resisted adaption of farming and herding when these practices arrived in Europe about 8,000 years ago, according to a new study conducted by a team including Archaeology Professor Francesco d’Errico at the University of Bergen. 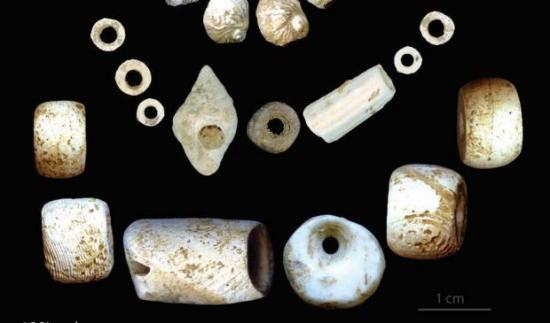 NOT ON MY LAND: Unlike South Europeans, the people of North Europe stuck to their old ways of life for several hundred years longer after the arrival of agriculture in Europe about 8,000 years ago. This is reflected in the refusal to let go of traditional clothing and ornament practices. The material in this picture belongs to Le Tai, Toulouse University and Essenbach-Ammerbreite, Archäologische Staatssammlung München. (Photo: Solange Rigaud)

Farming and herding were introduced 8,000 years ago in Europe by populations coming from the Near East. Starting in Greece and gradually making its way northwards and westwards. There were, however, some people that were less keen to adopt new ways of life; namely the North Europeans.

A recent study investigates the transition from hunter-gatherer societies to agricultural societies, comparing the personal ornaments used by the last indigenous foragers and the first agriculturalist populations all over Europe.

The results show that people in Central and Southern Europe took on the new ornaments and thereby the new ways of life soon after the Near East populations arrived in Europe, whereas the North Europeans held on to their ornaments and old ways of life for several hundred years longer.

In the study, North Europe is referring to the countries around the North Sea, including South of Sweden, with Norway at the very edge of the data collected.

“A likely motivation behind the resistance could be that hunting and gathering was a very successful economic strategy in the north of Europe and farming was or had been perceived by local Mesolithic groups, at least at the beginning, as a more risky economic strategy,” explains Professor Francesco d'Errico from the Department of Archaeology, History, Cultural Studies and Religion at the University of Bergen (UiB). “This had as a consequence the maintenance, even after the adoption of farming techniques, of local ornaments and, probably, clothes and attires.”

Professor d’Errico is also co-principal investigator (PI) of the TRACSYMBOLS project. D’Errico is also professor at the University of Bordeaux, where he is at France’s National Centre for Scientific Research (CNRS). He is co-author of the article about the new discoveries, Ornaments reveal resistance of North European cultures to the spread of farming, recently published in the renowned online journal PLoS ONE.

First author on the PLoS ONE article is Solange Rigaud, researcher at the Centre for International Research in the Humanities and Social Sciences (CIRHUS) at New York University (NYU).

“The reason for this pattern not having been appreciated in the past is that, unlike previous studies, we created a comprehensive database covering all of Europe and both the last hunter-gatherers and the first farmers,” says d’Errico. “This allowed us to compare beads on a large geographic scale and apply statistical analyses that could not be affective at a small scale.”

“This discovery goes beyond farming,” says Solange Rigaud. She upholds that it also reveals two different cultural trajectories that took place in Europe thousands of years ago, with southern and central regions advancing in many ways and northern regions maintaining their traditions.

Little is known about the interaction between agriculturalists, settling in new areas, and indigenous foraging societies during this period.

“We know that important genetic flux occurred between these populations but the nature and extent of their cultural exchanges largely remain an open question. Archaeological sites inhabited by the last foragers often leave faint archaeological traces of themselves and are very different from those of the first farmers,” says d'Errico.

The PLoS ONE study marks the first time researchers have used ornaments to trace the adoption of farming in this part of the world during the Early Neolithic period (8,000–5,000 BCE). The link between adapting new ornaments and cultural resistance is however well known and scientifically proven, according to the researchers.

In the article, the authors show how  the diversity of beads increased from east to west in Central and Mediterranean Europe. Examples of ornaments included in the material are perforated and grooved animal teeth, perforated shells and, in the North of Europe, pendants and beads made of amber.

The next step in this research is to compare data from beads and genetic data.

“This may help understanding to what extent and when the identified boundary also worked as a boundary reducing genetic exchange,” says d'Errico.