Those involved in iron making must have been highly specialized workers who were taken out of food production and other useful work to produce iron in the summer months. The iron was important, and it was also of high quality.

“A lot of this iron contains about 0.2 percent carbon. That’s on par with the best iron a blacksmith can get,” says Espelund. 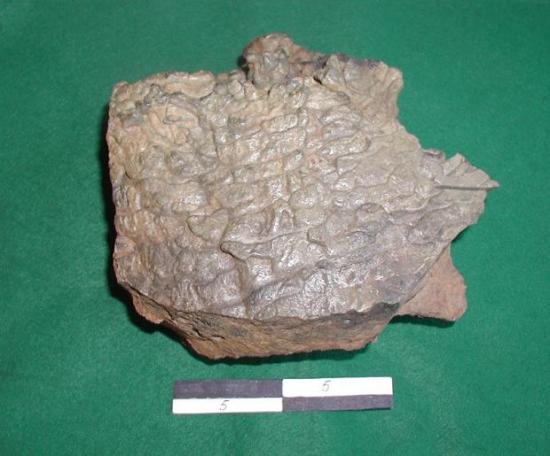 A piece of slag that solidified on a cold surface in the slag pit. Each groove may represent the tapping of approximately 10 kg of slag, which is evidence of the smelting process being carried out in batches. (Photo: Arne Espelund)

Iron with a low carbon content is malleable, without becoming brittle. However, various kinds of iron were produced depending on the type of application it was used for. How did these people of yore manage to make such good iron? Espelund has studied this for half of his life, but so far he doesn’t quite know how they pulled it off. No one knows for sure.

Espelund believes that this iron making method can be compared with the technique used in the Roman Empire — and this in a region with no written language or imposing buildings.

This first technology was in use in Norway for about 900 years, from around 300 BCE to 600 CE. The production was so high that some 40 tonnes of iron per year were produced in Trøndelag around the year 200 CE. Much of the iron was probably exported south to the European continent, where phosphorus-free welding steel was sought after.

Around the year 600 CE the entire production stopped and lay fallow for several years.

“I think the market collapsed,” says Espelund. The crash coincides with pestilence and famine in Europe.

Traditional knowledge can disappear after only a few generations, and the art of iron making was transferred through doing it, not through the written word. Soon Norwegians no longer knew how iron was made.

“They had to start all over again,” says Espelund.

Three or four main types of ironworks, operated for about 2000 years, apparently without transferring design elements from one period to the next (Espelund 1992). Their distribution is also regional. Few iron findings exist in the three northern counties of Finnmark, Troms and Nordland. People must have traded iron from Trøndelag for fish and marine animals.

The ancient methods of production disappeared, but a new one was developed, until the next crash occurred with the Black Death that swept through Europe in the mid-1300s. The same story repeated itself, and yet another new production method had to be invented afterwards.

Espelund used this last production method in his experiments with schoolchildren in the 1970s.

Where did iron making originate?

People are not exactly queuing up to take over his research field, so Espelund is thankfully still going strong. But chemist Tore Haug-Warberg has taken great interest in the field.

At 85, Espelund is now quite grown up, and these days he is cleaning out his office at NTNU, after many years as a professor emeritus.

He has financed much of his research himself, partly by self-publishing books and working many hours beyond the call of duty.

It seems that the technology for the oldest iron production in Norway originally came from the east, perhaps from Georgia. Espelund has come across publications on iron production there, which shows that the furnaces resemble ones in Norway. The chemical analysis of slag from Georgia does not show any correlation with samples from Norway, but the furnaces with slag pits are apparently quite similar.

The Georgian furnaces are about 500 years older than the Norwegian ones. Maybe the technology came to Scandinavia from the Middle East.

Espelund hopes to travel to Georgia to find professional contacts, and no doubt more results will be forthcoming. But we may never know the whole truth about early iron production in Norway.

Arne Espelund has written several books, including “The evidence and the secrets of ancient bloomery ironmaking in Norway,” which can be useful for those who want to know more.