Nonmetric dental traits and the origin of East Asians 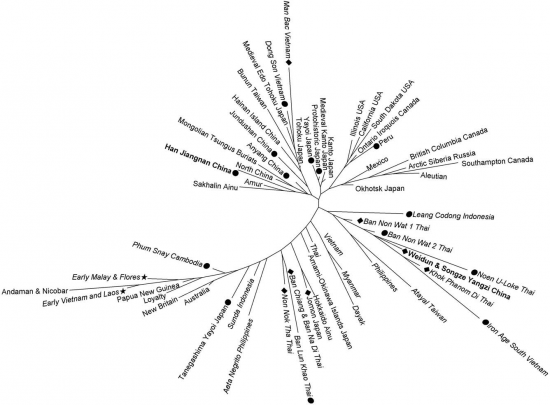 AJPA DOI: 10.1002/ajpa.22537
The aim of this study is to examine and assess the nonmetric dental trait evidence for the population history of East and Southeast Asia and, more specifically, to test the two-layer hypothesis for the peopling of Southeast Asia. Using a battery of 21 nonmetric dental traits we examine 7,247 individuals representing 58 samples drawn from East and Southeast Asian populations inhabiting the region from the late Pleistocene, through the Neolithic, Bronze Age, Iron Age, and into the historic and modern periods. The chief data reduction technique is a neighbor-joining tree generated from the triangular matrix of mean measure of divergence values. Principal findings indicated a major dichotomization of the dataset into (1) an early Southeast Asian sample with close affinities to modern Australian and Melanesian populations and (2) a very distinct grouping of ancient and modern Northeast Asians. Distinct patterns of clinal variation among Neolithic and post-Neolithic Mainland Southeast Asian samples suggest a center to periphery spread of genes into the region from Northeast Asia. This pattern is consistent with archaeological and linguistic evidence for demic diffusion that accompanied agriculturally driven population expansion in the Neolithic. Later Metal Age affinities between Island and Mainland coastal populations with Northeast Asian series is likely a consequence of a South China Sea interaction sphere operating from at least 500 BCE, if not from the Neolithic. Such results provide extensive support for the two-layer hypothesis to account for the population history of the region. Am J Phys Anthropol, 2014. © 2014 Wiley Periodicals, Inc.