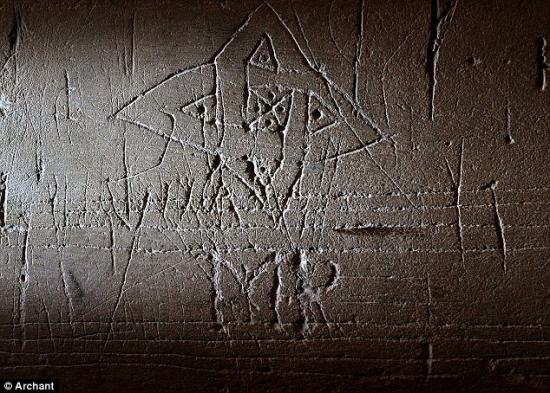 Staves: The cathedral's organist is hoping to play the pieces scratched into the walls of the building 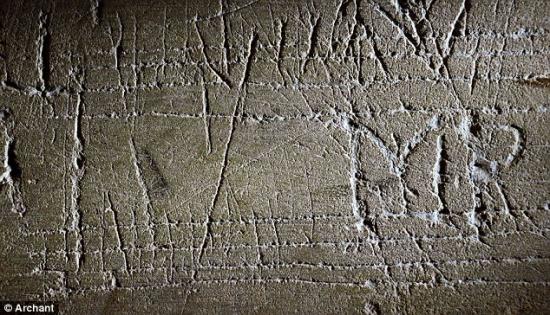 Extraordinary: The etchings have been in place for hundreds of years but were never deciphered until now

In the cathedral's nave, a clear outline of a ship had been recorded earlier - possibly a prayer left for a fisherman or mariner.

But until last week, no one had spotted that the ship was being pursued by an enormous open-mouthed whale.

'We think it could have been a prayer made by someone related to a sailor, and the whale is most likely Jonah's whale,' Mr Howey said.

On another pillar are two four-line musical staves, overlaid with a series of notes, thought to have been inscribed in the second half of the 16th century, before the introduction of the five-line staves used today.

'We are talking to the cathedral organist and he is having a look to see if he could play it,' Mr Howey said.

'Here we have a piece of music from 400 years ago being lifted off the walls - indeed it could have been the organist at the time who scratched this composition onto a wall in order to play it later.'

Project: Colin Howey, from the Norfolk Medieval Graffiti Survey, taking a record of the ship inscription

Iconic: Norwich Cathedral has been a centre of worship since it was built during the Norman period

A more sinister group of inscriptions consist of beautifully carved text which was written upside down, suggesting they may have had a magical import such as being used as curses.

'We know that from ancient times through to the medieval, inverting things was to wish bad upon them,' Mr Howey said.

'It is exactly the kind of folk magic that the church frowned upon in the extreme.'

One inscription, showing the figure of a man, has been interpreted as a drawing of a saint, which would be a unique discovery among English carvings.

The graffiti was presumably intended to smooth a worshipper's path to Heaven - and could even have been scratched into the wall by a Roman Catholic secretly expressing his forbidden beliefs.

Petal-shaped designs seem to have been carved deep into the stone by masons working on the construction of the building, and have been described as 'devotional gestures' or symbols to 'ward off bad spirits'.

The graffiti initiative, which has gained the approval of the cathedral's Dean and Chapter, will continue throughout the spring and early summer.

Construction on Norwich Cathedral began in 1096, during the reign of William II.

While it has undergone repeated renovations over the years, what remains of the church mainly dates back to the 17th century, when it was rebuilt after being ransacked by Puritans.