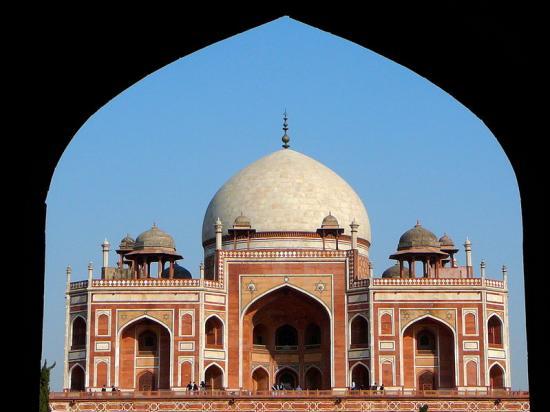 Early in the morning, a posse of nearly 100 masons troop in with their chisels to recast the weathered stones and crumbling lime facades of the 16th century mausoleum of Mughal emperor Humayun, a family tomb, which is home to 160 graves.
The tomb, one of the country's first garden mausoleum and a Unesco World Heritage Site, is getting a makeover to resemble its original state with a unique not-for-profit private-public conservation project partnered by the Aga Khan Trust for Culture, the Dorabji Tata Trust and the Archaeological  Survey of India (ASI).

"At the core of the structural renovation project is the restoration of 42 arched bays on the enclosure (outer ramparts) of the tomb which had collapsed with time, and 68 arched alcoves at a lower level. The stonework of the terrace and the elevated plinth in the forecourt have been relaid," Ratish Nanda, conservation architect and project director of the Aga Khan Trust For Culture,  told IANS.

The tomb was known to be have been commissioned by Humayun's wife Hamida or Haji Begum, who is also entombed in the mausoleum along with five Mughal princes, including Dara Sikoh. It was built by Persian architect Mirat Mirza Ghiyath.

The three-year renovation project of the tomb began with a memorandum of understanding in 2007. The flowing water channels were rebuilt to a 1:4000 slope, a large rain water harvesting system coupled with desilting of Mughal wells brought the garden back to original, he said.

"We planted 2,500 trees and plants like mango, lemon, neem, hibiscus and pomegranate, which were favoured by the Mughals," Nanda said. The red-and-white tomb cast in sandstone and marble, built during 1565-72 AD on the bank of the Yamuna, is typical of the symmetrical Timurid architecture. It is enclosed by high walls on the northern, southern and western sides.

The eastern side opened to the river. A pavilion at the centre of each wall allowed people to enter the tomb. The walls were equipped with walkways and arcaded to look attractive.

"We removed nearly one million kilos of concrete laid here in the 20th century from the roof with hand tools to reduce excess weight and restore the original slopes and levels of the roof," Nanda told IANS.

On the lower plinth, 12,000 square metres of concrete was removed and the original stone paving was reset in the same radial alignment of the original plinth by manually lifting the red sandstones blocks, some of which weighed up to 3,000 kilos each.

"It required at least 15 masons to lift one stone," the conservation architect said. According to Nanda, "the original Mughal builders used a contrast of red sandstone and white marble to great effect".

Nanda's team has been inspired by a 19th century photograph of Humayun's Tomb, which shows the original structure.

"The project has trained conservation professionals and craftsmen from the countryside and has generated livelihood to nearly 700 people in the Nizamuddin neighbourhood," he said.

The restoration is part of a greater urban renewal project of the Nizamuddin area that includes restoration of the Humayun Tomb complex, the adjacent Sundar Nursery monuments and the Hazrat Nizamuddin shanty town, Nanda said.

Under the renewal project, the Aga Khan Trust has built schools, public toilets and a gymnasium for women in the surrounding Muslim-dominated Nizamuddin area. According to Additional Director General of ASI B.R. Mani, the Humayun's Tomb conservation project also includes the restoration of three smaller unnamed tombs in the surrounding area.

"Last year, we acquired 12 acres of archaeological land in the vicinity from Bharat Scouts and Guides for restoration," Mani said, outlining the sprawl of the conservation project.
The attractive Nila Gumbad (Blue Tomb) outside the complex has also been added to the project, said  superintendent archaeologist of  ASI's Delhi circle K.K. Muhammed.