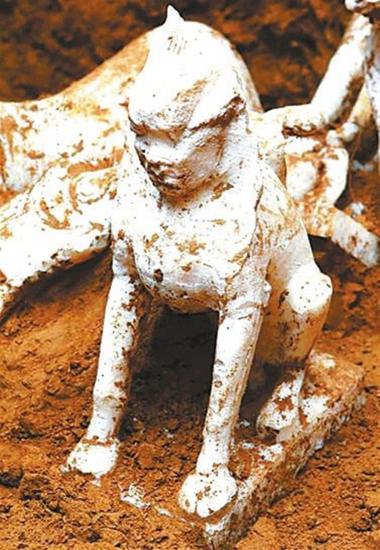 A sculpture of a sphinx dating back more than 1,000 years has been unearthed in a tomb in northwest China.

The delicately-carved sphinx, a human head on the body of a lion, is 36 centimeters high and was excavated in November along with eight warrior, horse, camel and lion carvings in Guyuan, a city in the Ningxia Hui Autonomous Region.

The tomb was one of 29 ancient graves in the area which archeologists have been excavating this year before the construction of a water plant. More than 150 funeral items, including carvings, pottery, bronze and iron wares, have been found so far.

The sphinx, made of white marble according to preliminary research, is intact except for minor damage to the face.

“The style of carvings had features from the west and are considered rare for ancient Chinese tombs during that period,” said Fan. White marble was also rarely seen in north China, he added.

The original sphinx is believed to have been created by Egyptians 5,000 years ago. It sits on the west bank of the Nile River near the great pyramids of Giza to the west of Cairo.