The genetics of East African populations: a Nilo-Saharan component in the African genetic landscape 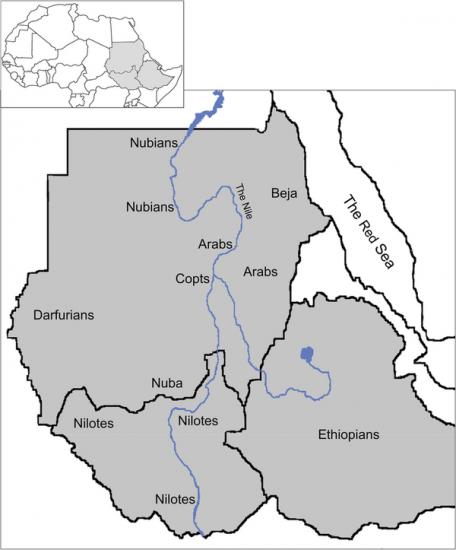 Nomadic Fulani are not shown in the map due to their wide distribution in the west, central and east of the Sudan. The inset in the top shows the locations of Sudan, South Sudan and Ethiopia in East Africa. Modified from d-maps.com.

East Africa is a strategic region to study human genetic diversity due to the presence of ethnically, linguistically, and geographically diverse populations. Here, we provide new insight into the genetic history of populations living in the Sudanese region of East Africa by analysing nine ethnic groups belonging to three African linguistic families: Niger-Kordofanian, Nilo-Saharan and Afro-Asiatic. A total of 500 individuals were genotyped for 200,000 single-nucleotide polymorphisms. Principal component analysis, clustering analysis using ADMIXTURE, FST statistics, and the three-population test were used to investigate the underlying genetic structure and ancestry of the different ethno-linguistic groups. Our analyses revealed a genetic component for Sudanese Nilo-Saharan speaking groups (Darfurians and part of Nuba populations) related to Nilotes of South Sudan, but not to other Sudanese populations or other sub-Saharan populations. Populations inhabiting the North of the region showed close genetic affinities with North Africa, with a component that could be remnant of North Africans before the migrations of Arabs from Arabia. In addition, we found very low genetic distances between populations in genes important for anti-malarial and anti-bacterial host defence, suggesting similar selective pressures on these genes and stressing the importance of considering functional pathways to understand the evolutionary history of populations.