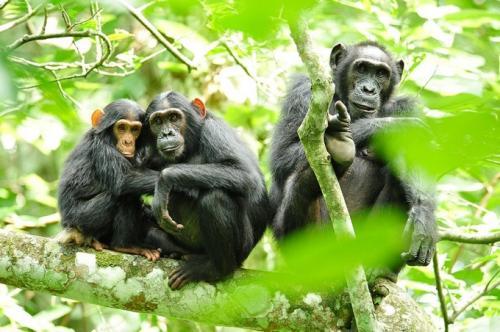 To simulate chimp behavior, UB scientists created a computer model based on equations normally used to describe the movement of atoms and molecules in a confined space.
As deforestation, climate change and other pressures threaten habitats, how might chimpanzees adapt?
An interdisciplinary research team has turned to the physical laws that govern matter to explore one facet of this question: how the animals will cluster and travel through their territory as the terrain they share with other members of their species shrinks.

To simulate chimp behavior, the scientists created a computer model based on equations normally used to describe the movement of atoms and molecules in a confined space.

"We thought it would be interesting to see if we could use the kind of modeling we use for physics to model the behavior of animals," says UB physics professor Surajit Sen. "We were pleasantly surprised that it works. Our model shows how competition for an important resource—food—affects how chimpanzees spread out in a given area."

The simulation has successfully replicated certain chimpanzee behaviors reported in the academic literature that researchers have witnessed in the wild. The model could be expanded in the future to predict how a shrinking habitat might affect chimp populations, Sen said.

He conducted the research with Matthew Westley, a UB physics PhD candidate, and Anindya Sinha, a primate behavior expert who serves as a professor and dean at the National Institute of Advanced Studies in Bangalore and as a senior scientist at the Nature Conservation Foundation in Mysore, both in India.

As Westley explains, the modeling technique the team used was fairly simple.

"We modeled each chimp as a particle that feels attraction or repulsion to other objects in the vicinity," he said. "We decided that all chimps would be attracted to food and repulsed by other chimps, who compete for food."

The key equation the simulation employed was Newton's Second Law of Motion, which states that Acceleration = Force/Mass.

Chimps were the masses in the equation, while the forces consisted of attraction to food and repulsion from other chimps. By assigning values to each force and determining the distance at which the forces would begin to affect the chimps, the team was able to simulate the direction and speed at which animals would move in relationship to food and to each other.

The research was published in September 2014 in "Nature's Longest Threads: New Frontiers in the Mathematics and Physics of Information in Biology," a book edited by two researchers at the National Institute of Advanced Studies.

As seen in nature

"Once the simulation had run for some time and reached a state of equilibrium, we saw chimps clustering into separate groups within the territory, just as they do in nature," he said. "We also saw some members of each group migrating to join other groups, which is a common behavior displayed by females in this male-bonded society."

The researchers also had success in expanding their basic model to mimic the observed characteristics of a group of chimpanzees in Guinea, western Africa, who had limited access to food.

To do so, the team made changes that included reducing the number of food sources available and making male and female chimps attracted to one another.

In equilibrium, this expanded simulation showed many male chimps leaving their home group to join another group or wander alone. Such behavior is somewhat unusual for males, who tend to stay in their native groups, but it's exactly what one primate researcher saw while studying the chimps in Guinea for more than 20 years.

"It's a mental block for us to think living creatures can be treated as particles, but in reality, many decisions that animals make are based on basic attractions and repulsions: attraction to food and other resources, and repulsion from danger," Sen said. "I wouldn't want to philosophize about it beyond that; it's pure coincidence that the model works."