New study sheds light on survivors of the Black Death

A new study suggests that people who survived the medieval mass-killing plague known as the Black Death lived significantly longer and were healthier than people who lived before the epidemic struck in 1347.

Caused by the bacteria Yersinia pestis, the Black Death wiped out 30 percent of Europeans and nearly half of Londoners during its initial four-year wave from 1347 – 1351.

Released Wednesday (May 7) in the journal PLOS ONE, the study by anthropologistSharon DeWitte in the College of Arts and Sciences provides the first look at how the plague, called bubonic plague today, shaped population demographics and health for generations.

The findings have important implications for understanding emerging diseases and how they impact the health of individuals and populations of people.

"Knowing how strongly diseases can actually shape human biology can give us tools to work with in the future to understand disease and how it might affect us," DeWitte says.

She says the Black Death was a single iteration of a disease that has affected humans since at least the 6th century Plague of Justinian.

"Genetic analysis of 14th century Y. pestis has not revealed significant functional differences in the ancient and modern strains," DeWitte says. "This suggests that we need to consider other factors such as the characteristics of humans in order to understand changes in the disease over time."

To better understand those human factors DeWitte has spent the last decade examining the skeletal remains of more 1,000 men, women and children who lived before, during and after the Black Death. The skeletons, maintained in the archives of the Museum of London, were excavated from a handful of well-documented London cemeteries, including St. Mary Spital, Guildhall Yard, St. Nicholas Shambles and St. Mary Graces. 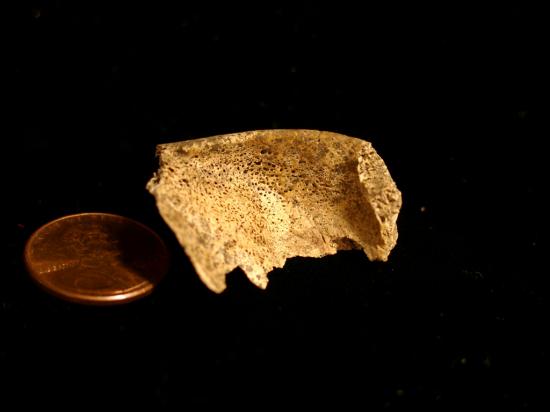 DeWitte looks for porous lesions that form in the top portion of the inside eye socket.

The skeletons are catalogued in 3-foot by 1-foot boxes. As she studies each skeleton, DeWitte determines biological sex, age at death and analyzes specific markers, including porous lesions, and teeth, to gauge each individual's general health. Her bioarchaeological research is providing a new dimension to the study of Black Death and provides the first look at the lives of women and children during this medieval time period.

"It's innovative because of the analytical approaches I take. I'm providing more nuanced reconstructions of life in the past than is possible with more traditional methods in my field," DeWitte says. "My Black Death research is rare because the samples that I use are exceedingly rare. There are only a handful of large cemetery samples that are clearly linked to the 14th century Black Death.

"And, most medieval historical records only tell about the experience of men. We have little information about the experiences of women and children and the poor in general during medieval plague epidemics, including the Black Death. My bioarchaeological data allows us to understand how the population in general fared during and after the epidemic."

DeWitte looks for porous lesions that form on the top of the skull.

DeWitte's analysis has revealed several important findings. Most notably that:

DeWitte says she was surprised by how much of a change she estimated between the pre- and post-Black Death periods.

"The Black Death was just the first outbreak of medieval plague, so the post-Black Death population suffered major threats to health in part from repeated outbreaks of plague," DeWitte says. "Despite this, I found substantial improvements in demographics and thus health following the Black Death."

In addition to the PLOS ONE journal article, DeWitte has a related article appearing in the current issue of the American Journal of Physical Anthropology.