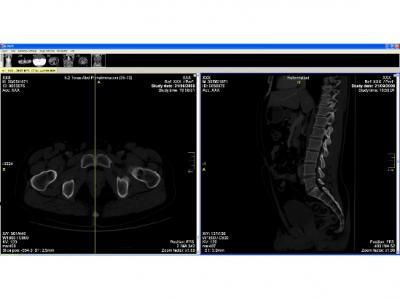 Researchers at the University of Granada, Spain, have designed a new computing system that determines the age and sex of a corpse with a reliability of 95%. This system is based on free software called Image and a free DICOM displayer called K-Pacs. This state-of-the-art system is very different from the traditional macroscopy systems used to evaluate the osteoarticular features of a corpse, and it is much faster and user-friendly.

The author of this study is Manuel López Alcaraz, a researcher at the Forensic Anthropology Laboratory of the University of Granada, in collaboration with professors Miguel Botella López, Inmaculada Alemán Aguilera and Pedro Manuel Garamendi González.

The authors of the study examined 169 DICOM files (Digital Imaging and Communication in Medicine, the international standard for distributing medical images) of CT scans of patients between 17 and 90 years of age supplied by the Castile-La Mancha health service (SESCAM).

"Age and sex are essential for the identification of corpses, and the pubis is especially relevant for this purpose. In our study, we exploited the great capacity of computer systems to discriminate between the different gray shades in a histogram (the human eye only can discriminate 64) to determine how histograms can provide information about age and sex", Lopez Alcaraz states. The researcher notes that this technique might be useful in virtopsies or virtual autopsies. "At present, the main drawback of virtual autopsy is that it cannot replace the macroscopic analysis of tissues for the identification of potential pathologies, determining whether an injury was inflicted before or after death, assessing the course of an injury...etc. As the new technique is based on image analysis, it can be applied to virtual autopsy to provide many more answers than traditional analysis methods.

The researcher affirms that this is a step forward in the field of Forensic Anthropology. "We should replace traditional osteological methods with new technologies and exploit the advantages of the visual communications and image era", the researcher states.