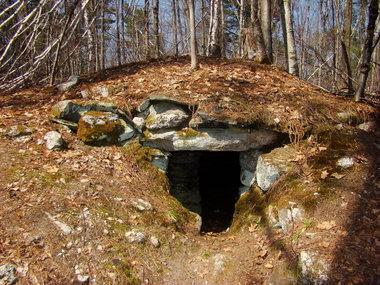 The Goshen Stone Chamber in Goshen

Many New England communities have within them dirt-covered stone “mounds,” dug into the earth and meticulously lined and covered with stones; some of the stones that cover the tops weigh tons. Some would say they are the remnants of root cellars, but an Ashfield man who for 15 years has studied the ancient stonework thinks otherwise.

James E. Vieira, a stonemason, writer and Northeast Antiquities Research Association member, believes there is ample evidence that Ancient America was a melting pot of races from other lands, noting that other parts of the country have ancient stone ruins. He says the mound builders may be behind stone construction in the Northeast because their skeletal remains with anatomical abnormalities are found here just are like the skeletal remains in other earthen mounds.

Mound builders are believed to have been prehistoric inhabitants of North America who, during a 5,000-year period, constructed various styles of earthen mounds for religious, ceremonial, burial and elite residential purposes.

“It’s the most enigmatic earthwork on the planet,” Vieira told an audience who had gathered in Buckland at Mohawk Trail Regional High School for his presentation, “The Search for the Mysterious Stone Builders of New England,” part of Franklin Land Trust’s year-long 25th anniversary celebration. 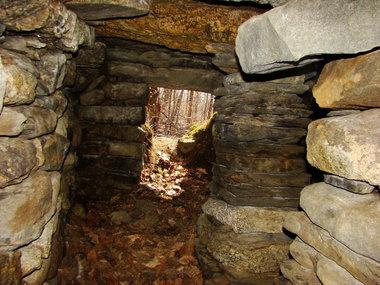 The interior of the Goshen Stone Chamber in Goshen

Vieira has spent thousands of hours researching mounds throughout the world—some geometric earthen constructions 50 acres and larger, and he has been amazed by the mathematical and engineering sophistication used to construct them. Some mounds are shaped like undulating serpents; one in Ohio is a quarter-mile long.

“Monk’s Mound is an earthen pyramid at Cahokia, Ill.; it has a base of 14 acres (one acre larger than the great pyramid) is 100 feet high and is comprised of 22 million cubic yards of earth brought from over a mile away,” he explained. “You find the same mathematics and geometry in the American earthworks like the 51.84 slope angle of the great pyramid and the 187 foot grid pattern found at Teotihuacan in Mexico.”

Some mounds have been opened and in them found artifacts of antiquity: tools, pipes, carvings, tablets and jewelry.

“The mound builders were a very sophisticated culture we know very little about,” Vieira said. “But this is not a scattered, nomadic people,” and they had a keen understanding of astronomy as evidenced by their stonework that marks equinoxes and solstices.

Though he said many archaeologists say the stonework is “colonial ruins,” Vieira disputes that. For one reason, these structures are not connected to a colonial foundation, he said.

In addition, some of the chambers built into the mounds are too narrow or inaccessible to have been used for root cellars, and they have roof openings which make it impossible to store food.

In Montville, Conn., there is a 38-foot stone chamber. “I don’t know what it is, but I can tell you what it’s not,” he said, adding that another chamber in Upton, Mass., has a 14-foot tunnel. One 25-by-25-foot mound in Putney, Vt., had carbon-dates remains from 492 A.D. “At the Putney chamber, you have to enter through the roof down seven feet,” Vieira said.

One cairn in Andover contained artifacts like an ax, javelin and hammer that were carbon dated to 2000 B.C., he said.

Vieira is quick to name other New England locations with ancient stone work, among them Goshen, Southwick, New Salem, Shutesbury and Belchertown in Massachusetts, South Woodstock, Vt., and Ledyard, Conn. Putnam County, New York, has more than 150 chambers, he said.

Some stonework – including cairns, dolmens, balanced rocks, walls and stone turtle effigies – has been destroyed as farmers cleared fields or stones were reused for other purposes.

Researching who these “mound builders” were, Vieira found an 1848 statement from Abraham Lincoln’s meditation on Niagara Falls in 1848: “The eyes of that extinct species of giant, whose bones fill the mounds of America, have gazed on Niagara as our eyes do now.”

These “giants” were seven to 12 feet tall, and Vieira has uncovered more than 2,000 accounts of them, what he called “a forgotten race.” Some accounts—from Smithsonian reports, magazines, newspapers and town histories—reveal the skeletal remains had double rows of teeth or other anatomical abnormalities.

Such accounts have come from Gill, Montague, Northfield, Hadley, Chelmsford, Middleboro, Martha’s Vineyard and Rockingham, Vt., Concord, N.H., and Hartford and Trumbull, Conn., among others.

Vieira contends that there were races in New England as well as Native Americans who created ancient stonework. “Native American oral history all around the country clearly speaks of a race of giants that existed in the lands when their tribes arrived,” he said.

His plans for the future include making a documentary film and pitching it to PBS or the History Channel. He is also working on a book.