CT scan of the skull of the mummy of an adult man (name unknown). The scan shows considerable evidence of dental abcesses and the loss of several teeth© Trustees of the British Museum

For many of us, the mummies of the British Museum hold a special place among our earliest museum memories. Shrouded in myth and magic, mummies evoke a macabre fascination, and are seemingly the embodiment of the past as a foreign country, far removed from us today.

The museum’s new exhibition, Ancient Lives, New Discoveries, literally and metaphorically peels away the layers of mystery from a group of mummies in order to tell the real stories of the real lives of these real people.

To emphasise the point, as you enter the exhibition you are greeted not by an image of death but by a vivid family portrait: a statuette of a husband and wife, Itu and Henutweret, sitting proudly with their young son, tells us that this is an exhibition about life, and about people not all that different from ourselves. 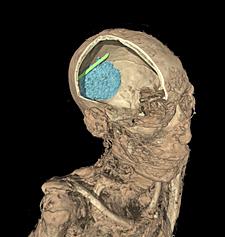 The CT scan of the skull of the mummy of an adult man (name unknown). The scan shows the remains of the brain (coloured in blue) and evidence of a tool that was left in the skull as a mistake during the mummification process (in green)© Trustees of the British Museum

The exhibition deploys both cutting-edge technology and precious artefacts to provide a rich context against which to understand life in Ancient Egypt.

Eight individuals – men, women and children – form the heart of the exhibition. Discovered at sites from across Egypt and dating from the Predynastic Period (around 3500 BCE) to the Medieval Period (around 700 CE), these people are representative of the wide spectrum of Ancient Egyptian society.

Some come from elite families who could afford lavish burials, others from simpler backgrounds, like Padimenet, a temple doorkeeper who had to begin his journey to the afterlife in a cobbled-together coffin, with a crude extension to accommodate his unexpected height.

Displayed alongside each individual are mesmerising, life-size CT scans. The scans allow you to digitally unwrap the mummies, from ornate coffins through to linen wrappings from which ghostly faces emerge down to soft tissue, bones and internal organs.

These astonishingly detailed scans have given archaeologists unprecedented insights into everyday life. The new findings from the CT scans of the eight mummies act as a springboard from which to explore aspects of Ancient Egyptian society, including diet, health and religion.

The first mummy you encounter is one of the oldest in the British Museum’s collection. The body of this young man, who died around 3500 BCE, was mummified naturally in the desert sands of southern Egypt.

His CT scan revealed the remnants of his last meal still in his stomach. This detail leads to an exploration of food and drink in Ancient Egypt. Their penchant for bread and beer are colourfully illustrated by a 3,500-year-old flatbread with the baker’s palm-print still visible and by a captivating model of a brewery complete with dozens of lively figures.

Throughout the displays, similar hidden secrets are brought to light by the latest technology. As one might expect, certain medical conditions are identifiable from the scans: almost all of the adults included in the exhibition suffered from excruciating tooth abscesses, and plaque in the arteries – a key indicator for heart disease – was also common.

Other findings are more unexpected. The most recent mummy on display, a young woman who died in what is now Sudan in around 700 CE, had a tattoo on her thigh.

Powerful scanning techniques enabled researchers to identify the tattooed symbol as the monogram of the archangel St Michael: an extraordinarily rare discovery.

The most poignant of the stories told in this exhibition are those of two children, deceased hundreds of years apart but both buried in exquisitely elaborate coffins.

One child, a two-year-old boy, was placed in a heartbreakingly tiny sarcophagus. The other, a girl of around seven, was laid to rest in a coffin intended for a young woman. It was only CT scanning that revealed that her body just reached up to the chest of the sarcophagus, showing her young age.

It is details such as these that help us to relate to the eight individuals and to bring us closer to understanding what life was really like in Ancient Egypt. This exhibition may remove some of the mystique of the mummies, but it takes away none of their power to intrigue and fascinate, and to provide a very human connection across the millennia