New age of the Lantian Homo erectus cranium extending to about 1.63 million years ago 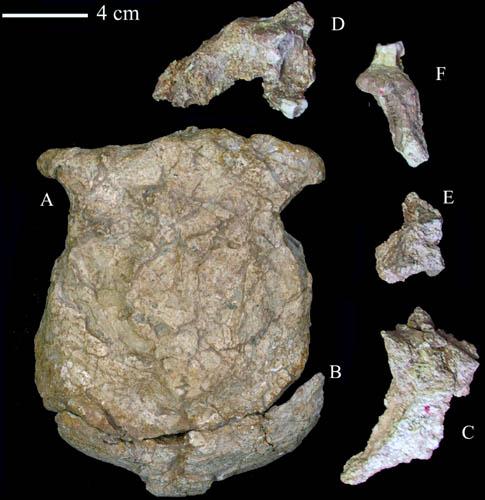 According to paper published online November 20 in the Journal of Human Evolution, the age of the Lantian Homo erectus cranium from Gongwangling, Lantian County, Shaanxi Province, China, is likely half a million years older than previously thought. Earlier estimates dated this important fossil, which was found in 1964, to 1.15 million years ago. A research team of Chinese and British scientists, have provided compelling evidence that the fossil should be dated to 1.63 million years ago, making it the oldest fossil hominin cranium known in northeast Asia, and the second oldest site with cranial remains outside Africa. Only the Dmanisi crania from Georgia that, like Lantian, are relatively small-brained, are older, at around 1.75 million years old.

The new date for the Lantian cranium provides good evidence that small-brained hominins moved rapidly eastwards in a warm period just after 1.75 million years ago. The presence of fossils much further south, in Indonesia, that are only slightly younger (c. 1.5 – 1.6 million years ago), also opens up the possibility that hominins followed northern and southern dispersal routes from Africa into Asia.

The research team, of scientists from the Guangzhou Institute of Geochemistry of Chinese Academy of Sciences, University of Exeter in United Kingdom and the Institute of Vertebrate Paleontology and Paleoanthropology of Chinese Academy of Sciences (IVPP), led by Professors ZHU Zhaoyu, Robin Dennell and HUANG Weiwen used a range of methods including loess-palaeosol stratigraphy, tectonic-geomorphology, sedimentology and mineralogy, geochemistry, palaeontology, paleomagnetism and rock magnetic methods to re-date the skull. Over 12 years (2001–2013) of research, they investigated some key geological sections by using high-resolution sampling, such as the Gongwangling and Jiacun sections in the Lantian basin of North China immediately north of the Qinling Mountains, and measured thousands of samples.

Based on reference and analysis of previous literature, four lines of new evidence from this research have been established to support a re-dating of the Gongwangling hominin from 1.15 to ca. 1.63 million years ago. First, the fossiliferous horizon cannot be attributed, as previously thought, to the 15th loess unit (L15), but lies below L15 and an underlying erosional surface, and there is therefore a stratigraphic break between L15 and the hominin horizon. Second, the fossil horizon is situated between the Gilsa Event (average age c. 1.62 million years ago) and the Olduvai Subchron (top age 1.77 million years ago) of the geomagnetic zones in the section, and thus the fossil horizon should correspond to the 22-23rd palaeosol units (S22~S23). Thirdly, the same type of subtropical faunal assemblage was found at both the Gongwangling sections and at Jiacun, and in the same stratigraphic position, i.e., S22–S23, between the Gilsa Event and the Olduvai Subchron. Fourthly, based on the palaeomagnetic time scale and the astronomical timescale of the Chinese loess-paleosol sequence, the age of the horizon of the Gongwangling fossil cranium should be about 1.63 million years ago, which was also a warm climatic period.

"This age is consistent with the geological context and the subtropical fossil fauna at Gongwangling, and also the small-brain size of the Gongwangling Homo erectus cranium, similar to that seen in Georgia and Indonesia", said HUANG Weiwen, a professor of the IVPP in Beijing.

"The revised age extends its age by about half a million years and makes the Gongwangling site a crucial benchmark in establishing the framework of the origin, migration and dispersal of early man in the Old World", said Robin Dennell of University of Exeter in United Kingdom, "It also provides reasonable evidence for re-evaluating the status of other early and controversial human fossils in China and Java. In addition, this new research rewrites the history of the Lantian hominin and provides additional knowledge of human evolution for the public".

The new dating of the Gongwangling cranium is a multi-disciplinary research based on the fine correlation between the Chinese loess strata (the loess-palaeosol sequence over a period of 2.5 million year) and marine oxygen isotope stages, and the results demonstrate again that the Chinese loess-palaeosol sequence should and will play an important role in studies of Quaternary global change and early human evolution over the last two million years.

This research was mainly supported by the National Basic Research Program of China and the Knowledge Innovation Program of CAS.