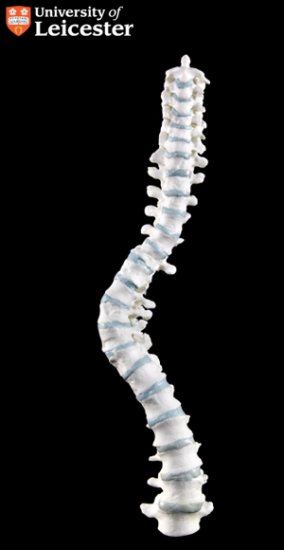 Shakespeare may have characterised Richard III as a hunchback, but now everyone can explore the true shape of one of history's most famous spinal columns.

University of Leicester scientists and multimedia experts have created a 3-D model of Richard III's spine, based on findings in a new academic paper. The paper, due to be published on May 30, gives the complete picture of the king's scoliosis for the first time.

This means that web users around the world can use their mouse to rotate 360 degrees around the representation of the late king's spine – showing that the king suffered from scoliosis, or a sideways curvature of the spine.

Crucially, the visualisation reveals how the king's spine had a curve to the right, but also a degree of twisting, resulting in a "spiral" shape.

The visualisation is based on research carried out by a team of researchers led by University of Leicester osteoarchaelogist Dr Jo Appleby, of the University's School of Archaeology and Ancient History.

The findings are set out in The scoliosis of Richard III, last Plantagenet King of England: diagnosis and clinical significance, a paper due to be published in The Lancet on May 30.

Among the key findings in the paper are:

During analysis, the skeleton was analysed macroscopically for evidence of spinal deformity and any changes to the tissue caused by the condition.

The spine was then scanned using computed tomography (CT), with 3D reconstructions of each bone made from the digital model. The team used a 3D printer to create polymer replicas of each vertebra – which were put together to recreate the shape of Richard's spine during his life.

The polymer reconstruction was photographed from 19 different points, and the pictures were then stitched together digitally to create the interactive 3D model – which can be accessed on any web browser and embedded into websites.

Dr Jo Appleby said: "The major finding we have made is being able to reconstruct the three-dimensional nature of the scoliosis and understand what it would have looked like.

"Obviously, the skeleton was flattened out when it was in the ground. We had a good idea of the sideways aspect of the curve, but we didn't know the precise nature of the spiral aspect of the condition.

"The arthritis in the spine meant it could only be reconstructed in a specific way, meaning that we can get a very accurate idea of the shape of the curve. It's really good to be able to produce this 3D reconstruction rather than a 2D picture, as you get a good sense of how the spine would have actually appeared."

"Although the scoliosis looks dramatic, it probably did not cause a major physical deformity. This is because he had a well-balanced curve. The condition would have meant that his trunk was short in comparison to the length of his limbs, and his right shoulder would have been slightly higher than the left, but this could have been disguised by custom-made armour and by having a good tailor."

"A curve of 65-85 would not have prevented Richard from being an active individual, and there is no evidence that Richard had a limp as his curve was well balanced and his leg bones were normal and symmetric."

Dr Phil Stone, Chairman, Richard III Society, said: "Examination of Richard III's remains shows that he had a scoliosis, thus confirming that the Shakespearean description of a 'bunch-backed toad' is a complete fabrication - yet more proof that, while the plays are splendid dramas, they are also most certainly fiction not fact.

"History tells us that Richard III was a great warrior. Clearly, he was little inconvenienced by his spinal problem and accounts of his appearance, written when he was alive, tell that he was "of person and bodily shape comely enough" and that he "was the most handsome man in the room after his brother, Edward IV".

"Thanks must be given to the University of Leicester for the work they have done on the remains, completing the work begun by the Richard III Society."