The fallow deer was about 6 years old when it died about 120,000 years ago on a lake shore in Germany. Its skeleton, recovered by archaeologists and belonging to the extinct species Dama dama geiselana (a different member of which is pictured above), shows an 11-millimeter, circular wound at the top of its pelvis, right next to its spine. But the hole (pictured below) doesn’t look like it came from a fight with another male or the tooth of a carnivore. No, this particular injury could only have been made by a human tool during a hunt, scientists say. And the only human species in Germany so long ago was the Neanderthal. 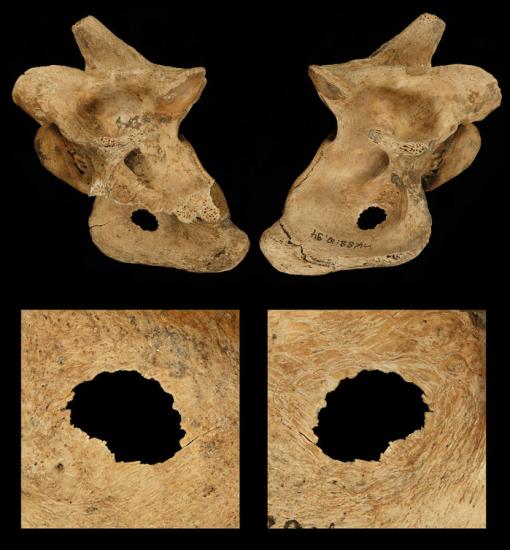 Archaeologists have discovered ancient Neanderthal spears in both the United Kingdom and Germany, but they weren’t sure how these hunters actually used them. Did they throw them at their prey from long distances? Or did they chase down the animals and stab them at close range? Now, scientists have recreated the 1.8-meter-long spears used by Neanderthals in Germany 300,000 years ago and attacked modern deer bones with them. They found they couldn’t make the kind of injury found on the 120,000-year-old skeleton by throwing the spears. Rather, they had to thrust the weapon upward at the animal’s hip while standing close to it, the researchers report today in Nature Ecology & Evolution. This suggests Neanderthals hunted at close range.

When present-day foragers hunt wild game like this, they usually work together to organize an ambush. So, Neanderthals may have cooperated to take down their prey, too, adding to the list of complex social behaviors our extinct cousins were capable of.