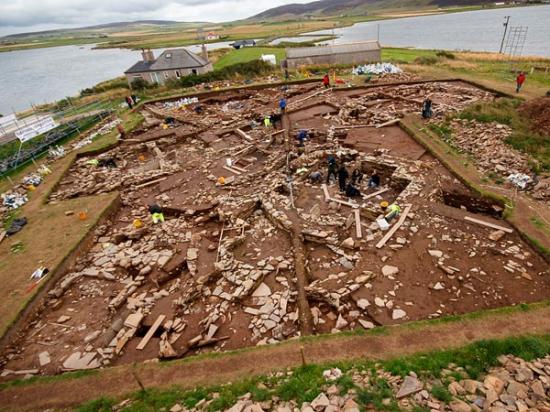 Scotland's Ness of Brodgar excavation pit has so far uncovered only about 10 percent of the ancient site. Photograph courtesy Hugo Whymark, ORCA

But age is only the half of it. Researchers say the site may have in fact been the original model for Stonehenge and other later, better-known British complexes to the south.

First discovered in 2002, the waterside site—called the Ness of Brodgar ("Brodgar promontory")—lies on Mainland, the largest of Scotland's Orkney Islands . 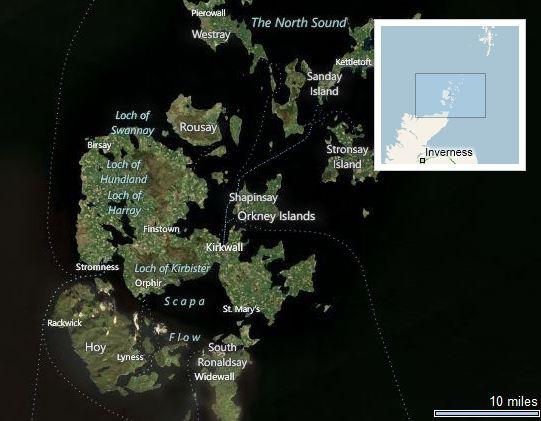 According to recent radiocarbon dating of burned-wood remains, the Ness was first occupied around 3200 B.C. and went on to include up to a hundred buildings within a monumental walled enclosure. 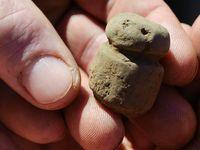 By contrast, the earliest earthworks at Stonehenge date to about 3000 B.C. And it would be roughly another 500 years before the first of the famous stones were set on Salisbury Plain.

In addition, ritual gatherings at the Ness of Brodgar may have foreshadowed feasts Stonehenge and similar sites such as Avebury.

"Orkney is one of the keys to understanding the development of Neolithic religion," said site director Nick Card of the Orkney Research Centre for Archaeology.

The idea of Orkney as a font of Stone Age culture isn't completely new.

It's been suspected, for example, that so-called grooved-ware pottery, which became dominant in Neolithic Britain, originated in Orkney and spread south. According to Card, it now appears that the crockery style may have ridden a cultural wave that included notions of stone circles and henges—ritual grounds enclosed by low earthwork "walls".

Despite its apparent influence, the Ness wouldn't last in this incarnation forever.

The dating of animal bones found around the finely crafted temple indicates that a huge feast ceremony was held in about 2300 B.C., after which the temple was effectively "decommissioned," Card said.

"We are perhaps looking at the remains [almost exclusively shin bones] of 600 individual cattle, which in anybody's book is a massive feast."

The Height of Stone Age Decor

The new date is based on excavations at the Ness of Brodgar in 2011, when researchers made a slew of discoveries inside the complex's temple, which was first unearthed in 2008.

"We have four of these stone dressers, which are almost at the cardinal points of the compass," Card said. "They probably functioned like an altar."

Made of red and yellow sandstone, the Stone Age furniture was "beautifully finished" and represented "the very top end of the market" for their time, the archaeologist noted.

The 2011 excavation also found further examples of mysterious geometric stone carvings that decorate the complex as well as evidence for the production of paints. Traces of orange, red and yellow paintwork were first detected on walls in 2010.

"There's a small chamber where there was evidence of different colors of ochre and little grinding stones with little hollows in them, where the pigment had obviously been ground up," Card said.

"I think we've always envisaged that Neolithic man would have used color, maybe as a makeup or for dying clothes, but this is the oldest evidence in northern Europe of the use of color on the walls of buildings," he said.

Other major finds from 2011 include an extremely rare, crudely wrought Neolithic human figure fashioned from clay.

"It's got a head with two eyes and a body and has been nicknamed the Brodgar Boy," Card said. "It was in the rubble of one of the smaller structures."

Bounded by a 13-foot-thick (4-meter-thick) stone wall, the Ness of Brodgar is located between two other important monuments, the Ring of Brodgar and the Standing Stones of Stenness—all part of the Heart of Neolithic Orkney UN World Heritage site.

Archaeologist Mark Edmonds thinks that thousands of years ago, the Ness was a place where Orkney's Neolithic farming communities gathered in large numbers for seasonal rituals and to commemorate the dead—a pattern likely later repeated farther south.

"What begins to happen at these sites in the later part of the Neolithic does seem to reflect the influence of ideas that are first brought into focus in Orkney," said Edmonds, of the University of York, who wasn't part of the 2011 excavation.

The Ness, Stonehenge , Avebury, and so on "are clearly ceremonial centers that bring lots of people together on a scale that you just wouldn't see at any other time and place" in late Stone Age Britain, the archaeologist added.

The complexes also all appear to share a common layout, roughly speaking.

The Ness of Brodgar "has the potential to transform our understanding of the later Neolithic in Britain," Edmonds added.

"I think it will help us to understand the nature of belief systems at the time," he said. "It will give us a far better insight into the social and political context in which these ceremonies and rituals took place."

Site director Card agreed, and pointed out that less than 10 percent of the Ness complex has been excavated.