Neolithic people from Near East migrated to Europe via island hopping 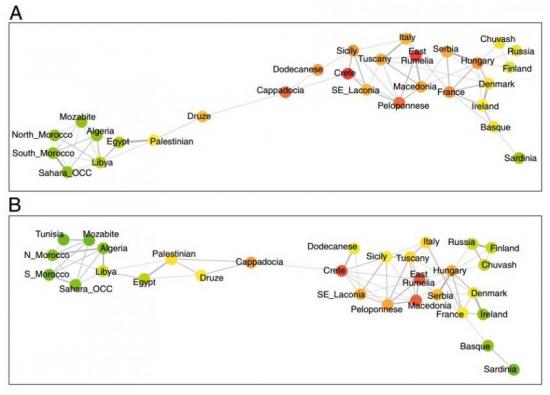 A multinational team of researchers has concluded that Neolithic farmers migrated to Europe from the Near East via the islands that dot the Mediterranean Sea between Turkey and Greece. In their paper published in Proceedings of the National Academy of Sciences, the team describes how they used genetic analysis on a large number of volunteers in the Middle and Near East and Europe to trace the path of early migration into Europe.

Scientists know that the first modern humans to migrate to Europe were hunter-gatherers—they arrived approximately 40,000 years ago. But then, the hunter-gatherers were slowly replaced by new migrants from the Near East approximately 9,000 years ago—migrants that were farmers. But the path they took has been under dispute by historians. In this new effort the researchers sought to lay the arguments to rest by conducting an exhaustive DNA study of the people that live in the region today.

The team collected DNA samples from 964 people living in 32 different places in the region—from northern Africa, to the Middle and Near East to islands in the Mediterranean Sea, to the European continent. Each of the DNA samples was scrutinized for markers known as single-nucleotide polymorphisms (SNPs).

People from the same place tend to have SNPs in common, which makes tracking their migration possible by looking for such markers in different populations. Analysis of the samples allowed the researchers to trace the movement of early people from the fertile crescent in the Middle East, to the Near East and into Turkey, and then as they sailed to nearby islands off the southern coast and finally, as they arrived on the southern shores of mainland Europe. 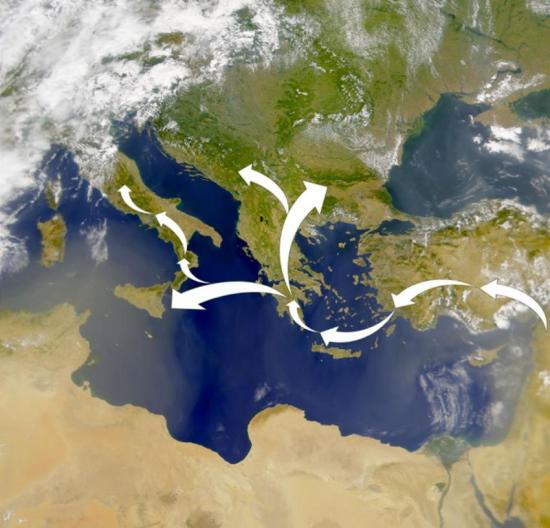 Genetic markers in modern populations indicate the Neolithic migrants who brought farming to Europe traveled from the Levant into Anatolia and then island hopped to Greece via Crete and then to Sicily and north into Southern Europe. Credit: Modified NASA map

The researchers note that despite the lack of archeological evidence, such as boats used by the migrants, the DNA analysis allowed for near certainty in plotting the course of Neolithic migration of early farmers to Europe. The SNPs showed very clearly, they claim, the path that the people took, thus, island hopping may be considered the main, if not only route that was taken. That would rule out such possibilities as a northern land route from Turkey to Europe through the Bosphorus strait, or farmers sailing directly to Europe from the Middle East. 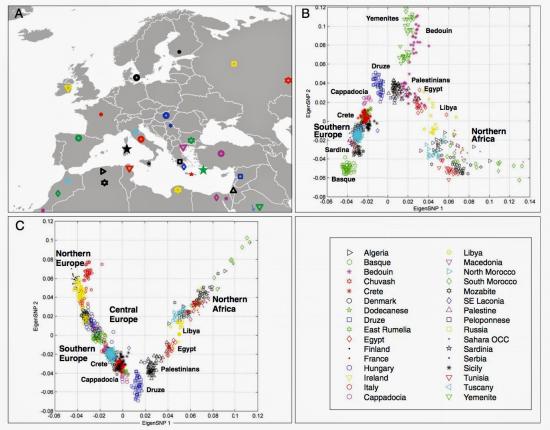 The Neolithic populations, which colonized Europe approximately 9,000 y ago, presumably migrated from Near East to Anatolia and from there to Central Europe through Thrace and the Balkans. An alternative route would have been island hopping across the Southern European coast. To test this hypothesis, we analyzed genome-wide DNA polymorphisms on populations bordering the Mediterranean coast and from Anatolia and mainland Europe. We observe a striking structure correlating genes with geography around the Mediterranean Sea with characteristic east to west clines of gene flow. Using population network analysis, we also find that the gene flow from Anatolia to Europe was through Dodecanese, Crete, and the Southern European coast, compatible with the hypothesis that a maritime coastal route was mainly used for the migration of Neolithic farmers to Europe.