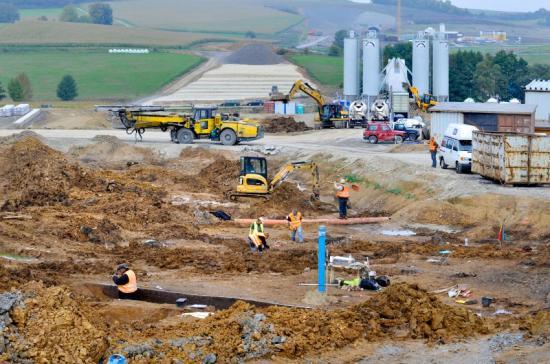 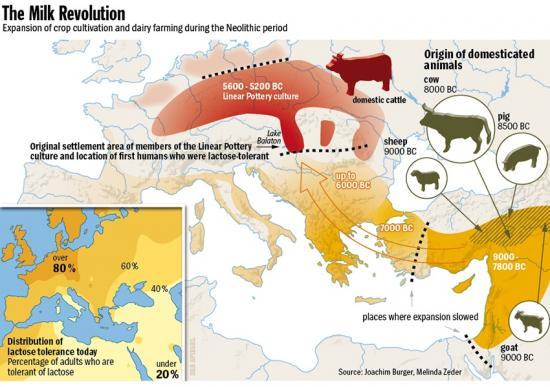 Graphic: Expansion of crop cultivation and dairy farming during the Neolithic period

New research has revealed that agriculture came to Europe amid a wave of immigration from the Middle East during the Neolithic period. The newcomers won out over the locals because of their sophisticated culture, mastery of agriculture -- and their miracle food, milk.

Wedged in between dump trucks and excavators, archeologist Birgit Srock is drawing the outline of a 7,200-year-old posthole. A concrete mixing plant is visible on the horizon. She is here because, during the construction of a high-speed rail line between the German cities of Nuremberg and Berlin, workers happened upon a large Neolithic settlement in the Upper Franconia region of northern Bavaria.

The remains of more than 40 houses were unearthed, as well as skeletons, a spinning wheel, bulbous clay vessels, cows' teeth and broken sieves for cheese production -- a typical settlement of the so-called Linear Pottery culture (named after the patterns on their pottery).

This ancient culture provided us with the blessing of bread baking. At around 5300 BC, everyone in Central Europe was suddenly farming and raising livestock. The members of the Linear Pottery culture kept cows in wooden pens, used rubbing stones and harvested grain. Within less than 300 years, the sedentary lifestyle had spread to the Paris basin.

The reasons behind the rapid shift have long been a mystery. Was it an idea that spread through Central Europe at the time, or an entire people?

Many academics felt that the latter was inconceivable. Agriculture was invented in the Middle East, but many researchers found it hard to believe that people from that part of the world would have embarked on an endless march across the Bosporus and into the north.

Jens Lüning, a German archaeologist who specializes in the prehistoric period, was influential in establishing the conventional wisdom on the developments, namely that a small group of immigrants inducted the established inhabitants of Central Europe into sowing and milking with "missionary zeal." The new knowledge was then quickly passed on to others. This process continued at a swift pace, in a spirit of "peaceful cooperation," according to Lüning.

But now doubts are being raised on that explanation. New excavations in Turkey, as well as genetic analyses of domestic animals and Stone Age skeletons, paint a completely different picture:

The new settlers also had something of a miracle food at their disposal. They produced fresh milk, which, as a result of a genetic mutation, they were soon able to drink in large quantities. The result was that the population of farmers grew and grew.

These striking insights come from biologists and chemists. In a barrage of articles in professional journals like Nature and BMC Evolutionary Biology, they have turned many of the prevailing views upside down over the course of the last three years.

The most important group is working on the "Leche" project (the name is inspired by the Spanish word for milk), an association of 13 research institutes in seven European Union countries. The goal of the project is to genetically probe the beginnings of butter, milk and cheese.

An unusual circumstance has made this research possible in the first place. Homo sapiens was originally unable to digest raw milk. Generally, the human body only produces an enzyme that can break down lactose in the small intestine during the first few years of life. Indeed, most adults in Asia and Africa react to cow's milk with nausea, flatulence and diarrhea.

But the situation is different in Europe, where many people carry a minute modification of chromosome 2 that enables them to digest lactose throughout their life without experiencing intestinal problems. The percentage of people with this modification is the highest among Britons and Scandinavians (see graphic).

It has long been known that these differences are based on Europeans' primeval origins. But where did the first milk drinker live? Which early man was the first to feast on cow's milk without suffering the consequences?

Groups Did not Intermingle

In a bid to solve the mystery, molecular biologists have sawed into and analyzed countless Neolithic bones. The breakthrough came last year, when scientists discovered that the first milk drinkers lived in the territory of present-day Austria, Hungary and Slovakia.

But that was also where the nucleus of the Linear Pottery culture was located. "The trait of lactose tolerance quickly became established in the population," explains Joachim Burger, an anthropologist from the University of Mainz in southwestern Germany who is a member of the Leche team.

Deep-frozen thighs are stacked in Burger's laboratory, where assistants wearing masks saw open skulls. Others examine bits of genetic material from the Stone Age under a blue light.

The group will hold a working meeting in Uppsala, Sweden in November. But even at this stage it is already clear that large numbers of people from the Middle East once descended upon Central Europe.

There are also signs of conflict. The intruders differed from the continent's Ice Age inhabitants "through completely different genetic lines," Burger explains. In other words, the two groups did not intermingle.