HINTS OF LOST CALIGULA PALACE FOUND THANKS TO THIEF

Italian police might have found intriguing evidence pointing to the long-lost villa of the incestuous and lunatic emperor Caligula, according to a report by the Italian daily Corriere della Sera.

The special art squad police arrested last week near Lake Nemi, south of Rome, a man trying to load part of an eight-foot-tall statue onto his truck.

Sitting on a throne, the headless marble statue featured on the left foot the "caligae" military boot after which the notorious Roman emperor, whose real name was Gaius Julius Caesar Augustus Germanicus, was nicknamed.

“Even without that feature, there is little doubt about the sitter. The throne is decorated with imperial symbols, while the sculpture is made from Greek marble of Paros, considered in antiquity the world’s best and most precious,” Sergio Rizzo and Gian Antonio Stella wrote inCorriere della Sera.

Thought to be worth about $1.6 million, the statue would represent Caligula sitting on the throne as the god Jupiter, supporting the theory that the insane and capricious emperor, who is said to have made his favorite horse Incitatus a senator, believed himself to be a living god.

The location where the statue was found, a tiny village in the Alban Hills which in Roman times was the center of the Diana cult, would be another strong indication for the existence of the emperor’s villa.

It is known that Caligula, who ruled from 37 to 41 as Rome’s third emperor, had two enormous “love boats” floating on the volcanic lake at Nemi.

Used by Caligula to indulge his sensual proclivities, the ships were scuttled in a "damnatio memoriae" after the 29-year-old emperor was murdered in his palace on the Palatine Hill by his own guard.

They were recovered in 1927 during the Fascist rule of dictator Benito Mussolini.

Measuring 230 feet by 66 feet, the ships still featured details such as exquisite wolf heads adorning the end of the beams and decks covered with marble and mosaics.

Indeed, they must have been incredible pleasure boats. According to the Roman historian Suetonius, they had "sterns studded with gems and ample space for baths, porticoes, and dining rooms, and a great variety of vines and fruit-bearing trees. Reclining on these ships all day long, he would sail amid choral dancing and singing."

As the ships were uncovered, a lakeside museum was built for the extraordinary finds, but German troops torched them during World War II.

According to the Italian authorities, the recovered statue would point to the existence of Caligula’s long lost villa by the lake.

The sculpture would have been just one of the treasures filling the residence, which would have been a triumph of luxury and grandeur, just like the ships. Indeed, the villa might have suffered the same "damnatio memoriae" fate, as the broken statue might suggest.

“Perhaps an incredible treasure lies somewhere by the lake,” the Italian daily wrote. 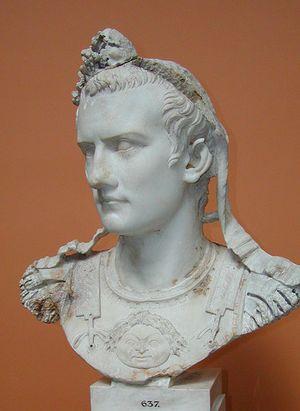