Negev Desert provides a view into art in ancient Israel

Many archaeologists in Israel refer to the Negev’s ancient rock art as “scribbles.” They mean this quite literally, as most of the drawings (technically called petroglyphs) are far from being the work of master artists. Depictions of human figures lack detail, and sometimes don’t even show the correct number of arms and legs. Animal drawings are little more than a few lines used to form a body, some legs, and maybe a horn, hump or tail. And the abundant geometric patterns are often just simple clusters of lines, circles and other basic shapes.

Although lacking aesthetic appeal, the rock art of the Negev, unlike most “mainstream” categories of archaeological evidence (such as pottery, lithics and architecture), gives us direct entry to the lives and thoughts of real human beings. The drawing and its style can reflect the carver’s interests, his state of mind and even his relationship to the society in which he lived. Among the Negev’s rock art, for example, are scenes of hunting, trapping, combat and worship. On occasion, one also finds depictions of parents accompanied by their children, and animals with their young. There is even a panel or two showing individuals having sex. 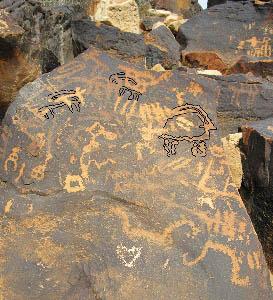 Despite its potential significance, however, the Negev’s rock art has generally been neglected by archaeologists. There are two major reasons for this. First, few scholars have actually ventured into the Negev to examine its rock art. Until well into the 20th century, the Negev was a dangerous barren wilderness occupied by Bedouin tribes. And for those explorers such as Edward Henry Palmer, who did venture into this wasteland, the Negev’s petroglyphs were “mere scratches on the rock, the work of idle loungers, consisting for the most part of mere names interspersed with rude figures of men and animals.”1 Given this attitude, it is hardly surprising that the Negev’s rock art was rarely documented.

The second reason petroglyphs have generally been overlooked is that they can be extremely difficult to date. In some cases, inscriptions written in Greek, Aramaic, Nabatean, Thamudic and early Arabic give an approximate date for an accompanying drawing, but such signed works are rare among the thousands of petroglyphs found in the Negev. Likewise, while scientific techniques like radiocarbon dating, thermoluminescence dating, and micro-erosion and micro-stratification analysis of patina (the dark “varnish” that gradually develops over petroglyphs) have revolutionized the archaeological study of rock art in other parts of the world, these empirical methods have yet to be applied in the Negev—primarily because a clear chronology for the rock art of the Negev has not been developed. Although such scientific methods may help to date individual carvings, they are of little use for developing an overall chronology of rock art styles, which in most cases changed little over thousands of years. Emmanuel Anati has attempted such a chronological schema for the Negev petroglyphs,a but his arguments about the evolution of drawing technique, size and subject matter have generally failed to convince.

In order to form a reliable chronology of rock art styles, thousands of individual stones and panels need to be meticulously documented and analyzed. This is where my research is focused and, after documenting 1,371 rock art panels across the Negev, which contain nearly 7,000 drawings, shapes and motifs, I am beginning to make some significant progress. For example, I have found that images are sometimes carved one over another, thereby providing a relative sequence of styles and dates. Likewise, some images depict animals that went extinct in the Negev long ago (such as the hartebeest) or animals that were domesticated in the historical past (such as the camel). Also, by comparing the relative shade of the patina of different petroglyphs carved on a single surface, one can begin to determine which motifs are older and which are younger. Finally, I am using statistical tests to prove that different rock art motifs from different periods generally follow certain stylistic conventions.

Already my work is showing that rock art can reveal a great deal about the Negev’s population and its interaction with neighboring regions at various times. For example, the rock art helps to identify two different groups who lived in the Negev during the Early Bronze Age (c. 3300–2000 B.C.E.). The first group, who lived in the central Negev highlands where much of the rock art is found, carved images of the ibex almost exclusively. The ibex is one of the Negev’s most common desert animals and, in the ancient Near East, its image often had sacred connotations. The second group, which was concentrated around major cities in the northern Negev, made the bull the focus of their art and religious imagery, as evidenced by the many bull images and figurines found at the site of Arad and elsewhere. The image of the ibex, however, is not found at Arad. The contrasting use of imagery shows that the central Negev’s desert groups saw themselves as culturally distinct from their northern urban neighbors.

The people of the Negev continued to carve ibexes into the Iron Age (c. 1200–586 B.C.E.) and, again, their rock art contrasts with the iconography used by other groups. At the caravan stations (and roadside shrines) of Horvat Qitmitb and ‘En Hazeva, which some have proposed served the religious needs of local nomadic groups, excavators found numerous sacred depictions of bulls and other horned animals and deities. But if the ibex was the symbol used by the local desert population, then the bull was most likely associated with the merchants and outsiders who were passing through. As such, these sites were not used by the local nomadic groups.

A final example comes from the Roman era, when the Negev was crossed by Nabatean caravans making their way to the port cities of the Mediterranean. Although the Nabatean presence in the Negev is well established through historical and archaeological evidence, as well as several Nabatean inscriptions, no clear Nabatean rock art tradition can be identified. This stands in marked contrast to the rock drawings carved by the nearly contemporaneous Thamudic-speaking tribes, who occasionally signed their names to depictions of ibex and camels.

I see rock art as a graphic reflection of an individual’s thoughts at a specific time—the lone desert shepherd who carved an image, most likely for his own use. This personal, individual act stands in contrast to the innumerable and often mass-produced finds that archaeologists typically study.