"Desert Kites" is a nickname to ancient structures first discovered by RAF pilots who flew over the Near East during the 1920's.

A kite by Kibbutz Samar, where two undulating walls are leading towards the round head. An Early Bronze Age grave (tumulus) was later built on top of the kite, and we found in it human and cattle bones, tiny beads and a stele.. (photo credit:UNIVERSITY OF HAIFA)

It all begun a few years ago, while walking back to the bus from a desolate archaeological site in the Negev. With a bunch of archaeology students trailing behind, two of us (Dani Nadel and Guy Bar-Oz) were talking about the age and function of the ancient "Desert Kites". It was during that morning that we decided to launch a new research project. We thus gathered several experts and built a multi-disciplinary research team; it included Uzi Avner (the Arava Institute and the Dead Sea-Arava Research Centre) who already excavated a couple of kites in the Negev, Dan Malkinson – a landscape ecologist (the Department of Geography), Naomi Porat (the Geological Institute) for OSL dating, Elisabetta Boaretto (the Weizmann Institute) for 14C dating and Sagi Filin (Technion) for 3D modeling. Within a few months we went out, camped in remote places and started to survey and excavate on behalf of the Zinman Institute of Archaeology at the University of Haifa.

"Desert Kites" is a nickname to ancient structures first discovered by RAF pilots who flew over the Near East during the 1920's. Over 4,000 kites are currently known between Yemen in the south and Armenia in the north, most of them only through Google Earth images. So far about 1% has been thoroughly surveyed, and less than 30 kites were ever excavated. Interestingly, the first to ever be excavated in modern times was a kite by Kibbutz Samar, followed by excavations near Eilat and in Sinai. 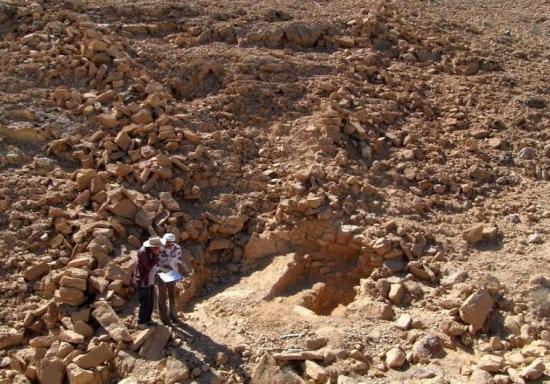 A general view of the Sayarim west kite

The kites in the Negev look like a funnel, with two diagonal walls (usually some 50–150 meters long) leading to a cliff below which a round wall was built. The aim was to chase and drive small herds of ungulates into the funnel, and down to the trap head where they were killed and then carried away to be eaten elsewhere.

We have studied the 12 known kites in the Negev. The structures were excellently planned by their contractors, based on deep knowledge regarding both the behavior of the target animals and the landscape. Their construction details show sophisticated techniques and well organized manpower, which is not self evident for desert societies. The target animals were gazelles and maybe also onagers. Today we are using a Laser Scanner and photogrammetric methods to construct high-resolution 3-D models of the kites.

For obtaining a wider view of the kites phenomenon, we also launched a project in Armenia and established collaboration with Boris Gasparyan (Institute of Archaeology and Ethnography, National Academy of Sciences, Armenia). We added Dafna Langgut (Tel-Aviv University) to study past vegetation communities, and Israeli and Armenian scholars and students spent several weeks together in excellent collaboration, in the field, in the labs and in leisure time. We excavated there four kites, all located on the fringes of the Ararat Depression, 900-1,000 meters above sea level, in a barren landscape covered by smelly sedge with no trees. One of the kites was actually a wide enclosure with several cells annexed to it. Likely, it was used to capture wild sheep and keep them alive.

Based on radiometric dates, it appears that most Negev kites were first constructed during the Early Bronze Age (about 5,000 – 4,500 years ago). This was the period that the Pyramids were built in Egypt, and palaces and temples were constructed in many urban centers around the Fertile Crescent. We were able to date two kites in Armenia, to the end of the Middle Bronze Age (about 3,500 – 3,200 years ago). 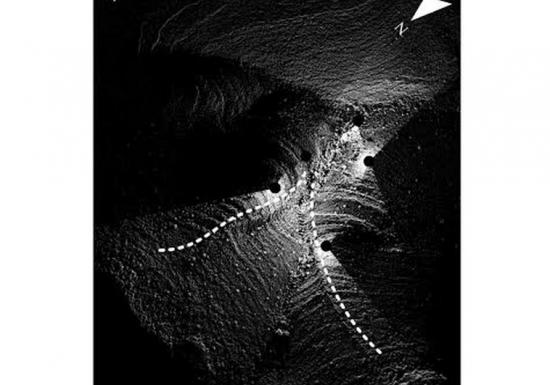 An aspect of the Achshuv Negev kite virtual model, based on laser scans.

From a broader point of view, one can't refrain from admiring past societies living in some of the harshest and driest areas. While urban societies were thriving at the time, the desert nomads and herders were inventing ingenious ways to survive, and indeed show high technological skills and complex social organization. Noteworthy, many of the Near Eastern kites are among the longest structures in their time, yet built in the deserts and not in or near the urban centers. Their contribution to local economy and diet must have been substantial, to be worth the efforts.