Nebraska (USA): Dissecting A Sod House To Discover The Past

Members of the Custer County Historial Society get ready to pull down the sod wall. (Photo by Jackie Sojico, NET News)

A team of Nebraska historians, archaeologists, and ecologists is working together to do an unusual kind of autopsy. They’re dissecting a sod house. Homesteaders across the Great Plains built these houses out of bricks cut from dirt. Researchers at the University of Nebraska-Lincoln are now hoping to learn from those two tons of dirt.

Larry Estes has had a sod house in his backyard in Gates, NE, as long as he can remember. He never really thought anything about it until a year ago. "A guy by the name of Joe Willhoit was working on my air conditioner. He said, 'Is that a soddy?' And I said, 'Yes.' From there on it just mushroomed. I can’t understand in my own mind why it’s important, but as many people who are here, it must be,” Estes said.

It’s important because, for a team of scientists from Lincoln, the sod house represents a snapshot of prairie life from more than a century ago. The scientists want to dissect this whole wall: take it apart and analyze everything inside it in a kind of autopsy.

Late last fall, Estes and others from the Custer County Historical Society tried to separate just one wall from the rest of the house. The whole thing weighed almost two tons. John Carter, a historian with the Nebraska State Historical Society, described moving the wall as, “no small challenge. But you know, we’re inventing this as we go along.”

They got it to work – eventually. It ended up taking about three hours, and a couple near misses with a tree branch. The wall eventually was placed on the back of a flatbed tractor trailer, packed between two wood pallets and wrapped in plastic – like a giant ice cream sandwich.

What dirt can tell us

LuAnn Wandsnider is a professor of archaeology at UNL and one member of the autopsy team. She was in Estes’ backyard the day the wall came down. She wants to know if the sod house can tell a more detailed story about homesteaders in Nebraska.

“It’s a laboratory that we can kind of look to see over the course of hundred years, what happened as people dealt with changing economic situations and as droughts came and affected them,” Wandsnider said.

The wall was in storage on UNL’s east campus for most of the winter. In March, Wandsnider and Carter joined Dave Wedin, a grasslands ecologist at UNL’s School of Natural Resources, to start the autopsy.

First, they had to take the wall apart. Wedin inserted a wide trowel between two layers of brick. David Murphy, an architectural historian at the Nebraska State Historical Society, said the wall hasn’t been that hard to take apart. “It kinda jostled in transit. The seal broke a little bit. We’ve been using these wide trowels, to make sure we don’t break it. And then it just seems to fall right out,” Murphy said.

Even though the wall comes apart pretty easily, the bricks themselves are really sturdy. “They’re amazing, you know. You can still see roots sticking all through it to hold it together,” Wedin said. 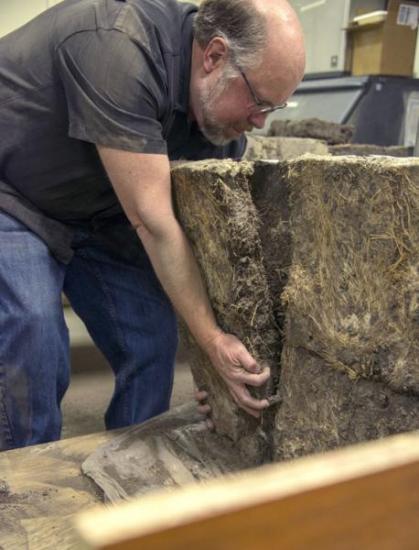 According to Dave Wedin, the density of the roots in the sod bricks are what makes the bricks so sturdy, even after 110 years. He tested the integrity of the sod by submerging a block in water - it has yet to dissolve after three weeks. (Photo by Peter Stegen, Platte Basin Timelapse)

Those are roots from the prairie grasses that were growing in the dirt before that dirt became building material. The sod is a kind of time capsule from a hundred years ago. Like settler life, we have some idea of what the prairie was like at that time. But Wedin wants to know more.

“Lewis and Clark made notes about the prairie but they weren’t quantitative data, they weren’t how much of this species? How much of that species? And they certainly didn’t measure how much organic matter, what percent carbon the soils had back then when they went through,” Wedin said.

Wedin will use modern techniques to analyze the sod bricks to get the same kind of information we have about the prairie today. Those details might sound trivial, but they can help scientists see how much or how little the prairie has changed in the past century.

Because there’s so much of it, the wall is also a chance to just try things. Wedin and the other scientists on the team can be creative with their experiments.

“We have chunks of this that we’ve broken up and put it in a greenhouse flat and we’re watering it to see if anything will germinate," Wedin said.  "The science tells us, you know, 99.9% of seeds are never gonna make it a hundred years. I’m not sure if it would revolutionize science in any way but it’d be really neat if we could.” 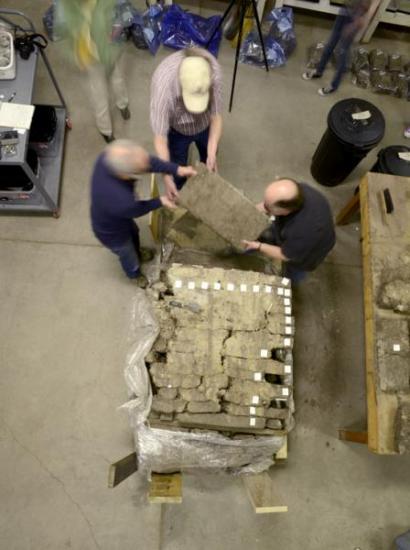 Back at the service shed at UNL, Wedin and Murphy take measurements of the huge brick they just removed. Wandsnider notes where in the wall this brick came from so later they’ll be able to match it to their data. Wedin cuts the brick into samples for the labs. “It’s like cutting up a Dairy Queen ice cream cake. What piece do you want?” Wedin said.

The autopsy is going to take a long time. The team still has to peel apart the rest of the bricks and divide them up among the labs doing analyses, and there’s still more than half the wall to go through. It will be a while before they get any results. But even though the autopsy is still in its early stages, Wedin said it’s already producing something - collaboration between different kinds of scientists.