It looks like Neanderthals may have beaten modern humans to the seas. Growing evidence suggests our extinct cousins criss-crossed the Mediterranean in boats from 100,000 years ago - though not everyone is convinced they weren't just good swimmers. 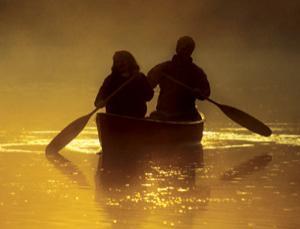 How hard can it be? (Image: Fancy Images/PlainPicture)

Neanderthals lived around the Mediterranean from 300,000 years ago. Their distinctive "Mousterian" stone tools are found on the Greek mainland and, intriguingly, have also been found on the Greek islands of Lefkada, Kefalonia and Zakynthos. That could be explained in two ways: either the islands weren't islands at the time, or our distant cousins crossed the water somehow.

Now, George Ferentinos of the University of Patras in Greece says we can rule out the former. The islands, he says, have been cut off from the mainland for as long as the tools have been on them.

Ferentinos compiled data that showed sea levels were 120 metres lower 100,000 years ago, because water was locked up in Earth's larger ice caps. But the seabed off Greece today drops down to around 300 metres, meaning that when Neanderthals were in the region, the sea would have been at least 180 metres deep (Journal of Archaeological Science, DOI: 10.1016/j.jas.2012.01.032).

Ferentinos thinks Neanderthals had a seafaring culture for tens of thousands of years. Modern humans are thought to have taken to the seas just 50,000 years ago, on crossing to Australia.

The journeys to the Greek islands from the mainland were quite short - 5 to 12 kilometres - but according to Thomas Strasser of Providence College in Rhode Island, the Neanderthals didn't stop there. In 2008 he found similar stone tools on Crete, which he says are at least 130,000 years old. Crete has been an island for some 5 million years and is 40 kilometres from its closest neighbour - suggesting far more ambitious journeys.

Strasser agrees Neanderthals were seafaring long before modern humans, in the Mediterranean at least. He thinks early hominins made much more use of the sea than anyone suspects, and may have used the seas as a highway, rather than seeing them as a barrier. But the details remain lost in history. Any craft were presumably made from wood, so rotted away long ago. The oldest known Mediterranean boat, a dugout canoe from Lake Bracciano in Italy, is just 7000 years old. Ferentinos speculates that Neanderthals may have made something similar.

There is a simpler explanation for how they reached the islands, says Paul Pettitt of the University of Sheffield, UK: maybe they just swam there. Pettitt also points out that the tools on the islands have not been chemically dated, so estimates of their age are based entirely on their design.

Even if Ferentinos is right, the Neanderthals were probably not the first hominin seafarers. One million-year-old stone tools have been found on the Indonesian island of Flores (Nature, DOI: 10.1038/nature 08844). Something, perhaps primitive Homo erectus, crossed the sea to Flores before Neanderthals even evolved.