Researchers at the University of Kent have recreated the processes Neanderthals used to produce sharp flint axes, and found that our ancestors were skilled engineers.

A modern-day 'flintknapper' replicated the sharpening processes that Neanderthals used to create tools - a sort of modern 'reverse engineering' of ancient techniques in use by three kinds of early 'hominin' including Neanderthals as early as 300,000 years ago.

The researchers found that Neanderthals could shape 'elegant' stone tools - shaping them to be hard-wearing, easily sharpened and with a perfectly balanced centre of gravity.

The reproduction of how Neanderthals worked shows that it is unlikely that stone flakes used in the tools could have been shaped  by accident - and that our ancestors intentionally 'engineered' stone cores to create tools fit for their jobs.

Dr Metin Eren, Leverhulme Early Career Fellow at the University’s School of Anthropology and Conservation and the flintknapper who crafted the tools, said: ‘The more we learn about the stone tool-making of the Neanderthals and their contemporaries, the more elegant it becomes.

'The sophistication evident in their tool-making suggests cognitive abilities more similar to our own than not.’

The researchers say that our ancestors 'designed' tools to be hard-wearing, easily sharpenable and have a centre of gravity that meant they were easily usable.

Dr Stephen Lycett, Senior Lecturer in Human Evolution and the researcher who conducted the laboratory analysis of the tools, commented: ‘Mobility is a factor in the lives of all hunter-gatherer populations, including Late Pleistocene hominins.

'Since mobile hunter-gatherers can only carry a fixed number of tools, it is paramount that the potential usefulness of their tools is optimised relative to their weight.

'The new analyses indicated that Levallois flakes appear to be particularly  in a variety of ways relative to other flakes. These flakes are on average thicker across their surface area, and more uniformly thick. These properties would have optimised durability.'

'The symmetry and evenly distributed thickness of Levallois flakes would also align the tool’s centre of mass with the tool’s motion during use, making them ergonomically desirable.’

Three types of prehistoric hominin -including Neanderthals - could produce the flakes, which were manufactured across Euroepe, Western Asia and Africa as early as 300,000 years ago. 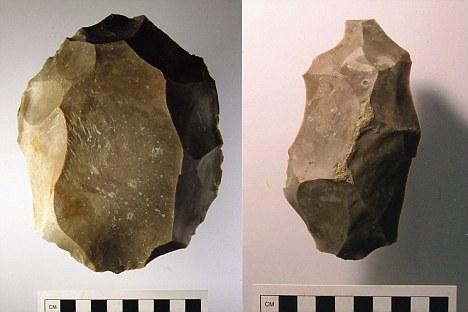 Researchers have thought that our ancestors might have intentionally sought out the flakes for their size and shape.

But it was regarded as controversial, and recently researchers questioned whether Levallois tool production involved conscious, structured planning.

Now, the experimental study – in which a modern-day flintknapper replicated hundreds of Levallois artifacts – supports the notion that Levallois flakes were indeed engineered.

By combining experimental archaeology with morphometrics (the study of form) and statistical analysis, the Kent researchers have proved for the first time that flakes removed from 'prepared' cores were more standard than ones created by accident.

Importantly, they also identified the specific properties of Levallois flakes that would have made them preferable to past mobile hunter-gathering peoples.

Dr Lycett also explained that ‘amongst a variety of choices these tools are ‘superflakes’. They are not so thin that they are ineffective but they are not so thick that they could not be re-sharpened effectively or be unduly heavy to carry, which would have been important to hominins such as the Neanderthals’.