A Neanderthal infant was discovered alongside two adults, potentially representing a prehistoric family. 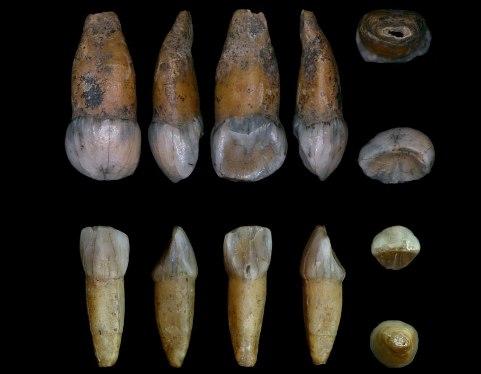 Neanderthal youngsters that made it to the "terrible two's" were large, sturdy and toothy, suggests a newly discovered Neanderthal infant. The child almost survived to such an age, but instead died when it was just one and a half years old.

The remains of this infant -- a lower jaw and teeth unearthed in a Belgian cave -- are the youngest Neanderthal ever found in northwest Europe, according to a study that will appear in the Journal of Human Evolution.

Since the remains of two adults were also previously discovered in the cave, the fossil collection may represent a Neanderthal family.

If the trio said "cheese" for a family portrait, their smiles would have been hard to miss, since Neanderthal front teeth were larger than those for modern humans.

Crevecoeur is a director of anthropological research at the National Center of Scientific Research (CNRS) in France.

She and her colleagues analyzed the Neanderthal child's remains, found at Spy Cave in Jemeppe-sur-Sambre, Belgium. The cave is part of a rock shelter located close to a small river, the Orneau.

"Its location on the bottom of the cliff that overhangs the valley was probably really advantageous with a clear view of the valley," Crevecoeur said.

Neanderthals started to use the cave around 44,000 years ago. The newly discovered infant, however, lived there about 33,000 years ago, suggesting Neanderthal groups persisted in this area over the millennia.

"Belgium has a long-standing Neanderthal history," she explained. "The country has the highest concentration of Neanderthal remains. The first Neanderthal specimen ever found was in Belgium during the 19th century."

The oldest DNA sequence of a Neanderthal also comes from Belgium.

While DNA analysis of the newly identified infant has not yet taken place, Crevecoeur said it could confirm whether the child did indeed belong to the two adults also found in the cave.

What is now known is that the child had thinner enamel on its teeth than what's found on those of modern humans. The infant, however, did appear to be growing quickly, with a spurt that may have begun when it was around a year old.

"There has been a lot of attention (paid) to Neanderthal growth and development, and others -- not members of this team -- have made statements that are based on very few fossils and pathetically small modern human comparative samples," said Trinkaus, a professor of physical anthropology at Washington University in St. Louis.

"We are limited in the numbers of fossils we have, and this is a welcome addition to help us get a better handle on the real variation that was there," he added. "And it is only with comparing patterns and levels of variation that we will understand the evolutionary processes involved."

Virtual reconstructions of the adult Neanderthals found at Spy Cave are underway. They will likely be unveiled when a visitor's center opens at the site in June 2011.