Neanderthal chefs may have spiced up menus with wild herbs 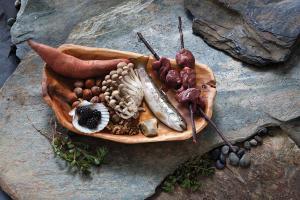 THE image of a Stone-Age man grasping the bony end of a bloody mammoth leg and chomping down on it with powerful gnashers is taking a bit of a battering. We already know that Neanderthals were partial to delicacies such as fish and small birds, with a healthy helping of plants. Now some are saying they might have flavoured their meaty feasts with wild herbs, too.

Without a time machine to take us back 40,000 to 50,000 years, the suggestion remains highly speculative. But our long-lost cousins were clearly not the carnivorous beasts we once assumed them to be.

The idea that they were partial to a handful of herbs comes from the hardened plaque – or dental calculus – chipped off the teeth of a 50,000-year-old Neanderthal from El Sidrón in Spain. A few years ago, Karen Hardy of the University of Barcelona and colleagues found traces of camomile and yarrow in the calculus – both plants with strong flavours but no nutritional value (Naturwissenschaften, doi.org/h33). They argued that the plants were eaten for medicinal purposes. Self-medication is common in the animal world, says Hardy, and it's very likely Neanderthals did the same.

Sabrina Krief of the French natural history museum in Paris, thinks differently, based on her observations of wild chimpanzees in Kibale National Park in Uganda. After a hunt, these chimps can eat up to three different types of leaf with their prey (Antiquity, doi.org/3mk). Chimps are thought to self-medicate with leaves, but Krief says some scoff leaves to spice up their food. Her rationale is that all the chimps in a group ate them at the same time, and it's unlikely that every chimp needed the same remedy. Also, different chimp tribes opt for different leaves.

If chimps flavour their food, why not Neanderthals? The palaeontologists contacted by New Scientist say this is possible but highly theoretical. What is clear is that Neanderthals were not simple carnivores. All hominins must eat carbohydrates to survive, says Hardy. Meat just doesn't provide enough energy.

There's also a limit to the amount of animal protein we should have in our diet – too much meat is not good for us, says Hardy. So at the very least, we know that Neanderthals liked some veg with their steak – though what kind of veg is still up for debate. Remains at a site in Gibraltar suggest they also liked nuts and wild olives.

And they clearly liked a variety of meats. Geoff Smith of the Monrepos archaeological research centre in Germany says they were more likely to eat bovids, horses and deer than larger game – mammoth and rhino were occasional treats. Signs that they broke up the bones of their game suggest that they sucked out the rich, fatty marrow, says Smith, who presented evidence for this at the Paleoanthropology Society meeting in San Francisco this week.

And what of their cooking techniques? Some Neanderthal sites have hearths, and Hardy's study showed signs of smoke from a wood fire and desiccated starches. They were probably well versed in the art of roasting.

Perhaps Neanderthals even boiled their food, boiling bones to extract the juices and nutrients, a bit like making a stew. "They may have done," says Wil Roebroeks of Leiden University in the Netherlands."Who knows?" The trouble, says Hardy, is we've never found a Neanderthal pot.

CANDY floss it's not, but the Neanderthals' starchy, vegetable-rich diet was not quite what the palaeo dentist ordered. It came with a healthy helping of glucose – a fabulous source of energy to power both your brain and the bacteria that live in your mouth. Dental plaque has always been a nuisance for hominins, says Karen Hardy of the University of Barcelona in Spain.

That plaque is now allowing Hardy and other researchers to study the diets of early humans in some detail. What might Neanderthal dental hygiene have been like?

It turns out early humans were probably no strangers to the toothpick. Chimps, bonobos, orangutans, long-tailed macaques and Japanese macaques have all been seen using twigs for this purpose. And in 2013, a team wrote that grooves in the teeth of a 1.77 million year old hominin found in Georgia were probably made by a lifetime of wielding toothpicks (PNAS, doi.org/3mm).

Hardy says early humans are thought to have used bits of wood, bone, sinew and grass to pick and even floss between their teeth.

Their risk of tooth decay might also have been offset by a diet of wild plants. Farmed cereal grains tend to stick to the teeth more easily than wild foods, which can be very abrasive, says Amanda Henry of the Max Planck Institute for Evolutionary Anthropology in Leipzig, Germany. This suggests the palaeo diet came with its very own in-built toothbrush.