Mr. James Winters at A Replicated Typo pointed me to a short hypothesis paper, Neanderthal-human Hybrids. This paper argues that selective mating of Neandertal males with females of human populations which had left Africa more recently, combined with Haldane’s rule, explains three facts:

- The lack of Neandertal Y chromosomal lineages in modern humans.

- The lack of Neandertal mtDNA lineages in modern humans.

- The probable existence of Neandertal autosomal ancestry in modern humans.

If you don’t know, Haldane’s rule basically suggests that there’s going to be some sort of breakdown in the heterogametic sex. In humans females are homogametic, XX, and males are heterogametic, XY. The breakdown need not be death (or spontaneous abortion). It could be sterility (e.g., some mutation or genetic incompatibility which results in the malfunctioning of the flagella of sperm would do it).

So you have a scenario where only Neandertal males are interbreeding with the intrusive groups from the south. The hybrids from these pairings would then lack Neandertal mtDNA, since mtDNA is passed only from mothers. But the male offspring would have Neandertal Y chromosomes. This is where Haldane’s rule kicks in: these males in their turn would not reproduce. Therefore only the female hybrids would pass on their genes. These females obviously don’t pass on a Y chromosome. And, they would pass on their non-Neandertal mother’s mtDNA.

Obviously this makes logical sense. How plausible do I judge it? That depends on the other options and the probabilities in the moving parts of the model above. My main issue with the idea of Haldane’s rule being operative in Neandertal-non-Neandertal pairings is this: the two lineages had not been separated for very long at all. The authors give ~250,000 years for the most recent common ancestor. Let’s just double that. That still isn’t that big of a divergence. A few years ago I read some stuff on hybridization in mammals. There’s some pretty straightforward reasons having to do with gestation why this is more of an issue in our lineage than birds, for example, where you have instances of viable crosses between species whose last common ancestor lived tens of millions of years in the past. But that doesn’t speak to the issue of Haldane’s rule necessarily. The problems with interfertility tend to crop up on the order of millions of years, not hundreds of thousands.

In any case, what about the alternatives? There could have been some sort of selective bias against mtDNA and Y chromosomal lineages. This can be straightforward biological. Imagine that Neandertal mtDNA is correlated with some diseases with reduce fitness. The authors allude to this sort of issue. But it might be social. Across Latin America there has been wholesale replacement of Amerindian Y chromosomal lineages among mixed-race populations. In fact you have replications across many societies of European Y chromosomal lineages + non-European mtDNA lineages being dominant, with variation in autosomes (e.g., in Mexico the autosome is balanced, in Argentina it is mostly European). There is also the issue that mtDNA and Y chromosomal lineages are subject to more vigorous stochastic dynamics because of smaller effective population sizes than autosomes. Autosomes are a combination of both parental contributions, but the uniparental lineages are passed from only one. Males are a total dead end in regards to the propagation of mtDNA lineages since they do not pass them on, while females naturally do not have a Y chromosome. The Neandertal mtDNA and Y lineages may simply have gone extinct, which is more probable if they were a small minority in the human population ~30,000 years before the present (the probability that a lineage with “fix” and replace all others is proportional to its frequency at time t = 0).

But really the main issue here for me really is the plausibility of hybrid incompatibility between Neandertals and non-Neandertals. This was a common idea a few years ago before the evidence for Neandertal-non-Neandertal admixture, and I’d started to get skeptical of it based on comparisons to other mammals. But now we have more thorough genetic data. 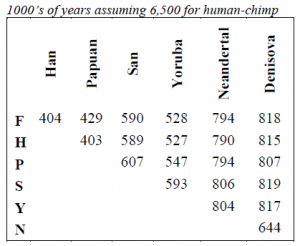 A table from the supplement of Genetic history of an archaic hominin group from Denisova Cave in Siberia.

It is showing the time since the last common ancestors between pairs of populations (F = French, the rest of the rows are the same as the columns). I wouldn’t take the dates that seriously. What I want to point out is that the last common ancestor between Neandertals and other human populations isn’t even a multiplicative factor greater than that between Africans and non-Africans. These particular estimates might be wrong in the details of their magnitude, but I think before we assent to the probability of hybrid incompatibilities we need to consider the high likelihood that Neandertals just weren’t nearly as different as we might think, or have thought.