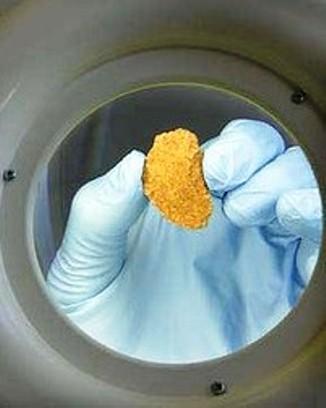 THE oldest ground-edge tool in the world has been discovered in Arnhem Land, prompting scientists to reconsider exactly when the technique of grinding to make tools sharp entered the Stone Age.

Unearthed from a sandstone cave in a remote part of south-west Arnhem Land in May, the basalt axe piece measuring 4 centimetres in length has been radio-carbon dated at 35,000 years old.

The discovery is significant as it predates by at least 5000 years the oldest known examples of other ground-edge implements from Japan and Australia, which have been dated at 22,000 to 30,000 years old. By comparison, the earliest ground-edge axes from Europe, West Asia and Africa are about 8,500 years old.

Archaeologist Bruno David from Monash University's school of geography and environmental science said the dating results of the axe found in a rock shelter in Jawoyn country were unanimous.

''We've got two dates from charcoal taken from above where the axe was found and two from below and they match exactly,'' Dr David said.

It also shows Australia was at the forefront of technical innovation 35,000 years ago and the international team behind the discovery, led by Dr David, believes it will further understanding of the evolution of human behaviour.

He said while there was evidence that the technique of grinding existed between 40,000 and 70,000 years ago, it was not used to make the edges of stone tools sharp but instead ochre and beads.

Dr David said the parallel scratch marks visible on the surface of the axe were evidence that it was constructed by grinding. The axe was also sent to France for analysis by renowned archaeologist Hugues Plisson from the University of Bordeaux.

''It would have been ground, probably against a sandstone-based grinding stone,'' Dr David said. ''The hard grains of sand left little groves and they are large enough to see with the naked eye.''

The fact that the axe piece is made from volcanic rock is also significant, as the area where it was found is sandstone. The nearest source of basalt is 40 kilometres away, which suggests the axe was traded and would have been highly valued.

Archaeologist Adam Brumm from the University of Wollongong said the discovery was evidence of an ingenious technological solution devised by the first Australians.

''Aboriginal material culture was regarded by early European observers as the most primitive technology on earth,'' he said. ''Yet at the same time that early European hunters were using stone arrowheads to bring down large and dangerous Ice Age animals, the ancestors of modern-day Aboriginal people employed an equally if not more sophisticated type of stone tool in order to gain access to vital foods.''

The Nawarla Gabarnmang rock shelter where the axe was found is located within 40 kilometres of Nauwalabila, one of the oldest known Aboriginal sites in Australia.

''Arnhem Land is one of the great world centres for rock art … it has so many styles,'' Dr David said. ''And this complexity allows us to track the history of cultural expressions.''

The research was part of a five-year project to establish what art and artefacts are located on Jawoyn country, and document and date them. The findings will be published next month in Australian Archaeology.