An archaeologist marks ruins of a structure constructed on foundation stones at the former site of Fujiwara-kyo in Kashihara, Nara Prefecture, on Dec. 10. (Kazuto Tsukamoto)

Foundation holes for buildings have been found in the ruins of the nation's first full-fledged capital here, suggesting the area may have been home to a structure used by the imperial family more than 1,300 years ago.

The Nara National Research Institute for Cultural Properties announced Dec. 11 that 13 holes for foundation stones were found in the central area of the former site of Fujiwara-kyo, the nation's capital between 694 and 710.

At the time, cornerstones were used to build important structures such as palaces or temples.

“When the capital was relocated to Fujiwara-kyo, the east side may have been dedicated to residential quarters for imperial family members or for other important purposes," he said. "The discovery could be a crucial turning point in research on Fujiwara-kyo.”

The holes, 1.2 meters to 2 meters across, were discovered in the Toho Kanga section, which is known as the district for government ministries. Toho Kanga was located 250 meters east of the ruins of Daigokuden hall, where the emperor performed important rituals.

Seven similar holes were found in a previous study two years ago.

Combined with the new finds, archaeologists now believe the holes were used to hold stones that propped up a structure about 8 meters by 11 meters comprising many posts.

They said the structure may have been a pavilion or a storehouse on stilts, and that part of the building’s roof may have been tiled.

A 4-centimeter-by-9.4-cm fragment of a bowl made of "sahari" copper and tin alloy also was discovered. 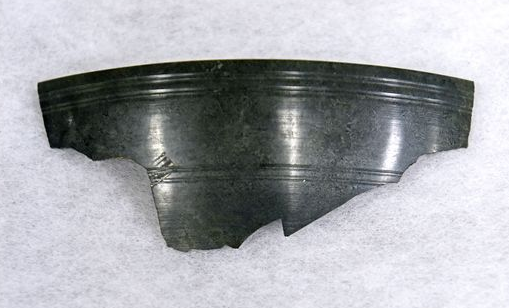 The researchers said it may have been used by a high-level official.

Five square-shaped holes with rounded edges were also found at a site about 20 meters to the west of Toho Kanga. Each side measured between 1.5 meters and 1.9 meters.

It is believed these holes were used to build a large structure supported by posts sunk into the ground. The location of the two buildings suggest they were part of city planning, according to the researchers.