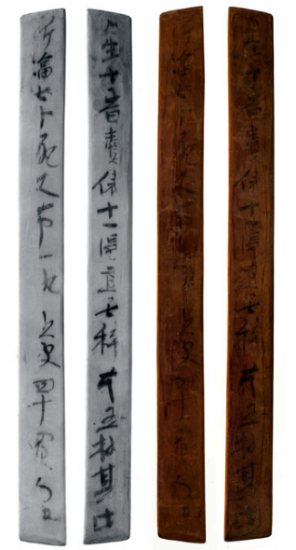 Eight ancient strips of wood adorned with kanji characters were found among treasures dedicated to the imperial family by Horyuji temple in Nara Prefecture in 1878.

The items rank among the oldest in Japan in terms of objects kept by temples, shrines or other facilities, as distinguished from those excavated at archaeological sites.

There is compelling evidence that some of the relics date to the Asuka period of the seventh century, according to the Nara National Research Institute for Cultural Properties and the Tokyo National Museum, which announced the discovery on July 22.

Characters on some of the pieces record sales and purchases of goods by Horyuji temple, located in the town of Ikaruga, officials of the institutions said.

One of them is 30.2 centimeters long, 2.7 cm wide and 5 millimeters thick. The characters for “tsukitachite,” a special word used to describe a date, appear at the top. The word was common currency in the seventh century, according to the Nara research institute.

Having served their purpose as a record of transactions, the pieces of wood were apparently reused at Buddhist rituals as frames for banners.

“It is miraculous that wooden strips from the seventh century have survived all this time, especially as they were reused and not buried in the ground,” said Haruyuki Tono, a professor of ancient Japanese history at Nara University.

The items are scheduled to be exhibited at Room 6 of the Gallery of Horyuji Treasures at the Tokyo National Museum from Aug. 23 to Sept. 19.