Count Vlad Tepes is also known as Vlad the Impaler

Estonian researchers believe they may have finally discovered the whereabouts of “Dracula’s” grave, which is in Italy and not the Romanian Transylvanian Alps as first thought.

The inspiration behind Bram Stoker’s 1897 gothic novel “Dracula” is thought to be Vlad III, the 15th century Prince of Wallachia in Eastern Europe. Known posthumously as Vlad the Impaler, the ruler was known for his brand of cruelty across Europe, which included impaling his enemies.

Vlad’s ultimate enemy were the Ottomans. Depictions of his endless cruelty made history books, securing his reputation as one of the biggest villains in Turkey’s collective consciousness, as written by Emrah Güler of the Hürriyet Daily News in 2012. Vlad’s story was also converted into a ballet last year in Turkey.

Born in 1431, Count Vlad Tepes was part of a noble family who belonged to the Order of the Dragon, a group that was founded as a means of protecting Christianity in Eastern Europe from Ottoman expansion. His father was nicknamed Dracul, meaning “Dragon,” so the young Vlad became known as Dracula, or “son of Dragon.”

In 1476, Vlad Tepes disappeared in battle. While some sources have claimed he died, researchers claim he was in fact imprisoned by the Turks, who hauled him away in chains. His daughter Maria was meanwhile brought to the Neapolitan court, whose ruling family was allied with her own family, where she was adopted and eventually married to a Neapolitan nobleman.

Scholars from the University of Tallinn say they have discovered evidence that suggests the count was taken prisoner, ransomed to his daughter in Italy and then buried in a church in Naples.

Researchers are claiming a newly uncovered headstone in Naples’ Piazza Santa Maria la Nova, in the same graveyard as his daughter and son-in-law, could be his final resting place.

The headstone was discovered by Neapolitan student, Erika Stella, who was writing a dissertation on the history of the church. Stella shared the photograph on the Internet and experts identified it with a certain level of confidence after years of research.

Medieval history scholar Raffaello Glinni said the 16th century tomb is covered in images and symbols of the House of the Transylvanian “Carpathians,” and not the tomb of an Italian nobleman.

“When you look at the bas-relief sculptures, the symbolism is obvious. The dragon means Dracula and the two opposing sphinxes represent the city of Thebes, also known as Tepes. In these symbols, the very name of the count Dracula Tepes is written,” Glinni told reporters. 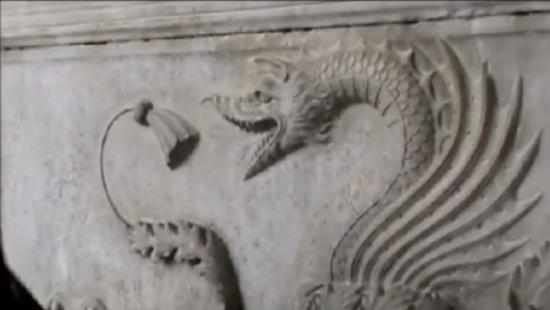 Researchers have applied for permission to investigate the grave from Italian officials.