Institute of Vertebrae Paleontology and Paleoanthropology 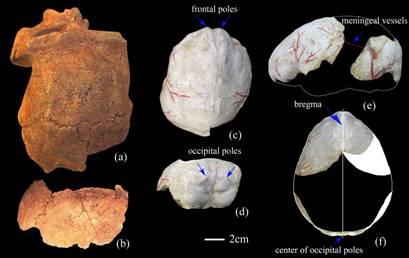 Endocasts are the most direct evidence for studying human brain evolution. Endocasts can provide information on brain size, general shape, morphology, and anatomical features of the external surface. Dr. WU Xiujie, Institute of Vertebrate Paleontology and Paleoanthropology, Chinese Academy of Sciences, and her collaborators, reconstructed the Nanjing 1 endocast, and compared it with a broad sample of endocasts of Homo erectus, Neanderthals, and recent modern humans.

The Nanjing 1 remains were unearthed from the Hulu Cave near the Tangshan Town of Nanjing City in southern China in 1993, and was dated to 580000–620000 years ago. Cranial morphological studies demonstrate that it shares a suite of features known as characteristic of H. erectus with both Eurasian and African specimens identified to be H. erectus, and that it should be referred to that taxon.

The Nanjing 1 endocast reconstruction is based on two endocranial casts from the original cranial fragments. One portion includes an almost complete frontal lobe, one-third of the anterior part of the left parietal lobe along with a small portion of the temporal lobe, and part of the right parietal lobe. The other portion consists of a partial left parietal and temporal lobe, the lower part of the occipital lobe, and most of the cerebellar lobes. The frontal bec, brain stem, foramen magnum, and most of the temporal and right parietal lobes were missing from the original, and thus had to be reconstructed, along with the upper cerebellar portion and a small inferior portion of the right cerebellar lobe.

The cranial capacity is about 876 cc, as determined by endocast water displacement. The Nanjing 1 endocast shares some common morphological and morphometric features with other H. erectus endocasts that distinguish them from the Neanderthals and modern humans. These include small cranial capacity, low height dimensions, simple middle meningeal vessel patterns, a high degree of cerebral-over-cerebellar lobe overhang, elongated and quite separated cerebellar lobes, and a narrow, low, short and flat frontal region. Some features are found to vary among H. erectus, Neanderthals and modern humans, such as the lateral Sylvian fissure position and the venous sinus and petalial patterns. 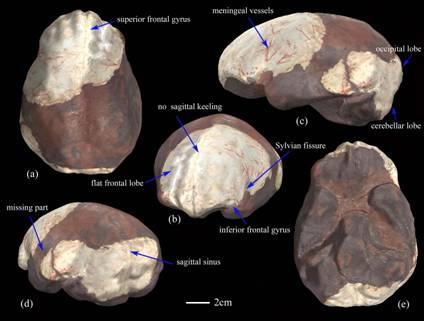 “When compared Nanjing 1 with the Zhou Kou Dian individuals, Hexian, and the Indonesian and African H. erectus specimens, Nanjing 1 has unique, large, superior frontal convolutions, and lacks strong posterior projection of the occipital lobes”, said Song Xing, coauthor, a Ph. D. student working under the direction of Dr. LIU Wu at the Institute of Vertebrate Paleontology and Paleoanthropology, Chinese Academy of Sciences.

“The morphometric analysis show that the Nanjing 1 is more similar to some of the geologically earlier African and Indonesian H. erectus than it is to the other Chinese specimens”, said Dr. Ralph L. Holloway, Department of Anthropology, Columbia University, “This is an interesting result that illustrates the metrical diversity of Asian H. erectus, but it is not unexpected given the temporal and geographical range of the species. The Nanjing 1 endocast is an important addition to our understanding of the variability of H. erectus endocast remains in China and elsewhere.”