Mysterious Kennewick Man looked Polynesian and came from far away

This clay facial reconstruction of Kennewick Man was carefully sculpted around the morphological features of his skull, and lends a deeper understanding of what he may have looked like nearly 9,000 years ago. (Photo by Brittney Tatchell/Smithsonian Institute )

The mysterious Kennewick Man, who died 9,000 years ago in the Columbia River Valley, was a seal hunter who rambled far and wide with a projectile point lodged in his hip, five broken ribs that never healed properly, two small dents in his skull and a bum shoulder from the repetitive stress of throwing spears.

He came from somewhere far away, far up the Pacific Northwest coast, possibly Alaska or the Aleutian Islands. He might even have come to North America all the way from Asia.

That’s the argument of the editors of a new, 688-page, peer-reviewed book,“Kennewick Man: The Scientific Investigation of an Ancient American Skeleton,” that will be published this fall by Texas A&M University Press.

Scientists have told their story of Kennewick Man before in lectures and interviews, but the new book represents the most detailed account of research that came about only after scientists sued for access to the bones. The Army of Corps of Engineers, which has custody of the bones, had pressed the scientists to publish their research. Now it has finally arrived, in a volume as thick and heavy as a textbook. 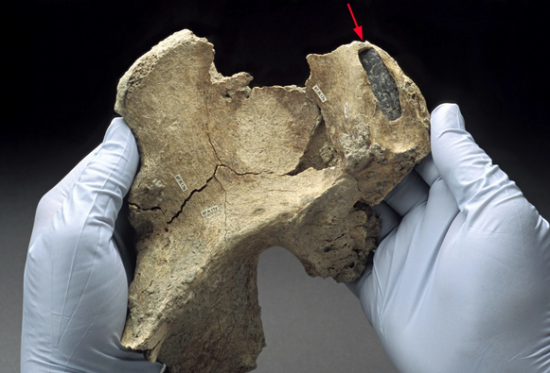 “Kennewick Man could not have been a longtime resident of the area where he was found, but instead lived most of his adult life somewhere along the Northwest and North Pacific coast where marine mammals were readily available,” the concluding chapter of the book states.

“He could have been an Asian,” said co-editor Richard Jantz, emeritus professor of anthropology at the University of Tennessee. “One of the things we always tend to do is underestimate the mobility of early people.”

His co-editor, Douglas Owsley, a forensic anthropologist at the Smithsonian’s National Museum of Natural History, agrees with that assessment of Kennewick Man: “He was a long-distance traveler.”

The book, which includes contributions from more than five dozen authors, researchers and photographers, describes many kinds of research on the skeleton, which was discovered in 1996. The chemical analysis of the molecular isotopes in the bones and the clues they provide to Kennewick Man’s origin are likely to be among the most heavily debated findings.

The analysis suggests that Kennewick Man lived off a diet of seals and other large marine mammals and drank glacier-melt water. His wide-set body is akin to what is generally seen in cold-adapted human populations. The book includes a vintage photograph of an Inuit seal hunter on an ice floe in Alaska — a suggested analog to Kennewick Man’s lifestyle. 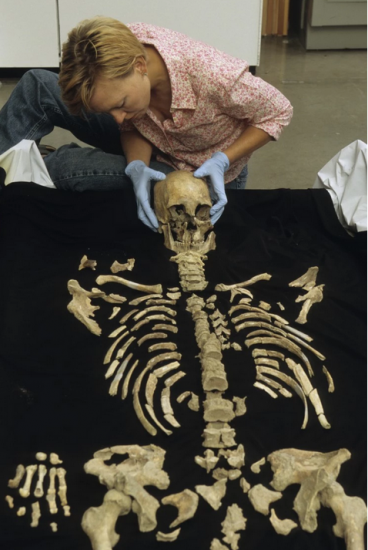 The morphology of the skull and long bones led National Museum of Natural History researchers to conclude that he likely shared ancestors with Asian coastal groups, particularly Polynesians. (Photo by Chip Clark/Smithsonian Institution)

The origin of Kennewick Man is relevant to the future disposition of his bones. Native American tribes have claimed him as one of their ancestors and have sought to rebury the remains in keeping with their customs. The scientists argued that there is no evidence linking any of today’s tribes to the skeleton.

They say that Kennewick Man’s skull, which is large and narrow with a projecting face, doesn’t look like the skulls of later Native Americans. This has been noted in other skulls from that era, including that of a teenage girl found in a submerged cave in Mexico, and the skull of a man found in the Channel Islands off the coast of California.

The dimensions of Kennewick Man’s skull most closely match those of Polynesians, specifically the inhabitants of the Chatham Islands, near New Zealand, the scientists say.

He wasn’t himself a Polynesian, however. Rather, according to the scientists, Kennewick Man and today’s Polynesians, as well as the prehistoric Jomon people and contemporary Ainu people of northern Japan, have a common ancestry among a coastal Asian population.

These were hunters of marine creatures and could have followed the edge of the ice around the northern rim of the Pacific Ocean, harvesting seals and using primitive watercraft to travel long distances, Owsley said.

“This is like a highway,” Owsley said of the coastal route of migration. “People are going from the Old World to the New World and back and forth.”

He said of Kennewick Man, “His morphology is what people look like in the Upper Paleolithic period along that whole circum-Pacific expanse.” 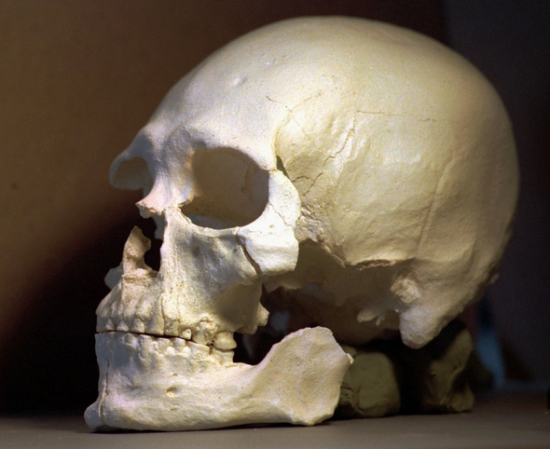 In September 2014, researchers will publish a new book, “Kennewick Man: The Scientific Investigation of an Ancient American Skeleton,” providing the most thorough analysis of any Paleoamerican skeleton to date. (Elaine Thompson/AP)

The heft of the volume and the confidence of Owsley and his co-authors in their interpretation of Kennewick Man is unlikely to end debate over who this ancient person was and how he was related to other Paleoamericans and Native Americans alive today.

The Corps of Engineers has legal custody of the skeleton because it was found on federal land. The Native American Graves Protection and Repatriation Act requires that unearthed bones be returned to tribes for reburial. But scientists sued to gain access to the bones, and a federal court in 2004 ruled in their favor, saying NAGPRA did not apply to Kennewick Man. Owsley said the scientists were allowed to study the bones for 16 days in 2005 and 2006.

Gail Celmer, a regional archeologist with the northwest division of the Corps of Engineers, said the corps will review the book and “see if there’s anything in there that changes how we’re curating the remains.”

She said she doubted it would end the debate over the bones.

“I don’t think it will ever settle the debate. People have different views about what NAGPRA actually is and how it’s defined.”

Two teenagers sneaking into a boat race originally saw the bones and notified authorities. The local coroner asked for assistance from a forensic anthropologist, James Chatters, who at first thought, based on the shape of the skull, that he was looking at the remains of an early pioneer. But tests on the spear point indicated that these were prehistoric remains.

Chatters excavated more than 300 bones, making Kennewick Man one of the most complete skeletons from that era.

In the legal fight, the scientists won the right to do a limited amount of research, starting in 2005, but until now they have not presented their full findings.

Three of the papers list Chatters as an author, but he does not sign on to the view that Kennewick Man came from somewhere far away.

“If he’s an eater of seals, he’s in the wrong position,” Chatters said. He said Kennewick Man is more than 100 miles from the nearest seal.

He also believes the spear point in his hip comes from somewhere not too far away.

“It’s a serrated edge, leaf-shaped point, of a style known as a Cascade point,” Chatters said.

Owsley said he and Chatters have agreed to disagree on some of these issues.

The ramblin’ man hypothesis will be viewed as a boost for the controversial idea that the Americas were peopled in multiple migrations by disparate populations — some moving on foot, some rowing or paddling along the coast.

The more orthodox view is that people from northeast Asia walked to the Americas during the Ice Age when sea levels were so low that the Bering Strait was dry land. Genetic evidence points to a common ancestry among Native Americans to a population that remained isolated for a long period of time in the now-drowned land known as Beringia, and that then migrated, possibly in several pulses, after the ice sheets covering much of North America began to recede and an ice-free corridor opened in the center of the continent.

Deborah A. Bolnick, an anthropological geneticist at the University of Texas, said that all Native Americans studied so far show markers, in their mitochondrial DNA, of a common ancestry with people who lived in Beringia. She said it is therefore reasonable to suppose that Kennewick Man is also descended from that population.

Genetic testing on Kennewick Man is being conducted in Denmark, and those results are eagerly awaited and could alter the scientific narrative yet again.

One issue that remains fuzzy is Kennewick Man’s age at his death. Owsley said he appeared to be about 40, but further testing, if permitted, would help pin that down. He argues that scientists should have further access to the skeleton, which for now is held in the Burke Museum at the University of Washington.

“I’m trying to honestly ensure that another generation of scientists has the opportunity to study this skeleton. They’re going to have technology that we don’t have,” Owsley said in an interview.

And there will always be additional questions. Did he have a mate? Children? A clan?

Chatters said he probably lived in a band of 20 to 40 people.

And he surely was a strong man, able to endure pain from myriad injuries and the challenges of life as a hunter, Chatters said. His survival from a serious injury — the embedded spear point in hip — seems to suggest something.

“He was injured severely enough when he was young that somebody took very good care of him,” Chatters said.