Sarah Griffiths
Source - http://www.dailymail.co.uk/sciencetech/article-3093131/Neolithic-village-hidden-beneath-Bulgaria-8-000-year-old-rows-streets-two-storey-houses-unearthed.html#ixzz3bBRel7mW
The stereotype of Stone Age men was cave dwelling brutes rather than sophisticated town planners who lived in two-storey houses. But archaeologists have uncovered the remains of 60 large houses built 8,000 years ago as part of a Neolithic village, in south west Bulgaria. Thought to be built by farmers, the part of the village that's been excavated so far, has three parallel streets with homes spread over five acres (215,278 square ft or 20,000 square metres). The later part of the Neolithic village also features a ditch that could be used as a canal, as a type of a port for boats

The remains of 60 large houses - all two storeys high - have been discovered as part of a Neolithic village built 8,000 years. The image above shows the extent of the village so far, which is currently being excavated by archaeologists in south west Bulgaria. They have found three parallel streets spread of five acres of land
Excavation of the site, located near the village of Mursalevo, is underway and has so far yielded pottery and jewellery as well as the fascinating buildings.
It first came to light in 1925 during the construction of a railroad but remained unexcavated until recently, when work began on the construction of the Struma Highway – a main road intended to link the Bulgarian capital Sofia, with the Kulata Crossing on the border with Greece.

Archaeologists from the National Institute and Museum of Archaeology of the Bulgarian Academy of Sciences have unearthed prehistoric houses that would have stood 26 feet (eight metres) tall with gabled roofs,Archaeology in Bulgaria reported.

Experts believe that the well-planned village, built between two ravines on the bank of the Struma River and consisting of 60 houses so far, was home to the earliest European civilisation.

The experts are excavating less than one third of the village so they are unsure how many there are in total and there may be several layers of simultaneously existing houses. They are made of wattle and clay with thin walls of eight inches (20cm) despite some of them being as large as 1,076 square feet (100 square metres), Professor Vasil Nikolov, co-lead archaeologist of the excavations told the Bulgarian daily newspaper, Standart.

All of the 60 buildings had two storeys and stood 26 feet (eight metres) tall, 'which attests to high technological advancements at the time,' he said.

Professor Krum Bacvarov who is co-directing the project with Professor Nikolov, Corresponding Member of the Bulgarian Academy of Sciences, told MailOnline that the ancient people used wood frames and then plastered them with clay mixed with dung.

'The floor of the second story was constructed of boards, also plastered with clay,' he said.

There are three main streets running parallel to each other, linking narrow streets with three to four houses on them, laid out to mirror the path of the sun. 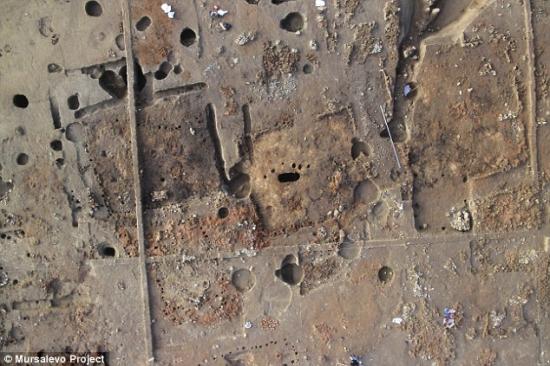 Experts believe that the well-planned village, built between two ravines along the banks of the Struma River, consists of at least 60 houses. They say it was home to a community belonging to the earliest European civilisation. This aerial view shows where tall wattle and clay walls would have stood
The layout is thought to be unique and it's even believed that there was a ditch-turned canal running through the settlement that was used as a port for fishing boats.

In order to build such as well-ordered town, the ancient people living there must have had a strong societal structure and specialist builders and planners.
But there is destructive feature to the town too. The Bulgarian archaeologists have found evidence that some of the houses were deliberately burned down, confirming suspicions of this prehistoric practice, even if they can't explain why it was carried out. Experts have argued that parts of several sites around Europe were burnt down in the same way.

Professor Bacvarov of the National Institute and Museum of Archaeology said the act 'could be a mechanism to cope with certain tensions related to social and or natural stresses.' He added: 'During the fire, the floor [of buildings which measured around 15cm thick] was burnt and fell down, together with all installations - ovens, storage bins, pottery, etc.  'We find it covering the remains of what was there on the first floor. He explained that individual homes were raised to the ground at different times.

The researchers found evidence that homes were filled with firewood – a scarce resource in the region – meaning that groups of people would have had to work together to fetch it. This suggests the burning was possibly ritualistic and must have been deliberately planned in advance. Interestingly, the practice has helped preserve some of the houses because the heat from fires baked and hardened the clay walls.

The well preserved remains have enabled the archaeologists to build up a detailed picture of what the houses looked like, including their size and placement of beams.

The village was built by farmers who worked the land, raised livestock and sometimes went hunting. 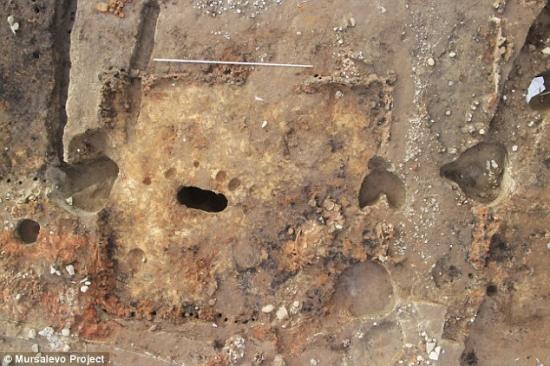 The houses are made of wattle and clay with thin walls of eight inches (20cm) despite some of them being as large as 328 square feet (100 square metres). You can see the boundaries of a house in this image

In one grave archaeologists discovered a skeleton buried in a foetal position. 'This one is late Neolithic and the burial in contracted position was the norm,' Professor Bacvarov said. 'What is interesting here is that the deceased was covered with two stones, one of them a quern, and you know that for the early farmers, grinders had deep symbolism related to fertility.

The team also found an Ancient Thracian sanctuary consisting of 20 burial pits, so far, three of which hold the remains of people including three skeletons of children who were victims of Thracian sacrifice between the 5th and 1st century BC.

'We have excavated three Late Iron Age pits containing the remains of sacrificed persons: one with an articulated skeleton, another one with just a leg, and a third one with the articulated skeletons of three children thrown in the pit and covered with stones,'he said.  'Human sacrifice was quite a common practice in Ancient Thrace, mostly between fifth and third century BC.'

It is thought the settlement was later home to Slavs in the early medieval period between the 7th and 8th centuries.

Archaeologists intend to dismantle the homes in order to look deeper underground.

A team of more than 130 people – 30 of whom are experts – are working 10 hours a day and at weekends, because the highway has already been held up by the work. There are plans to modify the route of the road so that an open air museum can be built on the important archaeological site. The lead archaeologists have been asked by Bulgaria's Ministry of Culture to propose a plan for the site and the remains may be housed under a protective canopy. Those leading the project have also said that they hope to reconstruct some of the homes to their original size.

Some of the buildings stood 26 feet (eight metres) tall, 'which attests to high technological advancements at the time,' one archaeologist said.This image shows the fallen floor of the second storey with some decorated installations. That house was almost 62 ft (19 metres) long.