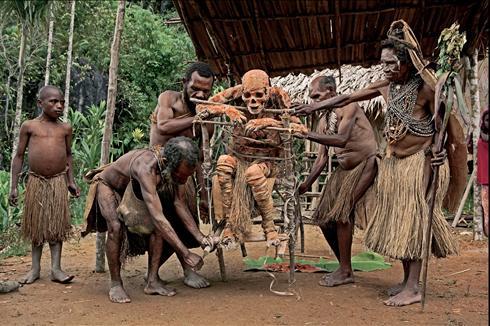 Call him the "Mummy Whisperer."

While movie explorers run screaming from mummies, bioanthropologist Ron Beckett hikes mountains and streams just to meet new ones. And to help put them together again.

"Not everyone can rejuvenate a mummy," Beckett says. "Sometimes my colleagues and I can help people who are losing some of the old skills."

Beckett, a professor with Quinnipiac University in Hamden, Conn., has traveled worldwide with colleagues eyeballing mummies up close and personal, and his latest trip, which required improvising the jungle equivalent of surgical glue, is only the latest in a very curious career.

"The situation in New Guinea was just extraordinary, the people still live with mummies as part of their daily lives," Beckett says. "They involve them with ceremonies honoring the dead and keeping their memories alive," and place them in cliff niches to mark the territory of the village.

Mummy science often requires teams of anthropologists, archaeologists and medical professors working together on ancient relics. Mummies come in many varieties worldwide, Beckett says, from the elaborately-prepared Egyptian mummies (dried with natron, a salt mixture used for drying in the desert air, their internal organs removed in some cases by skilled surgeons) to the Inca mummies of the Andes (left to dry naturally in the dry air of the mountains and Peru's Atacama desert).

The Anga culture, like others in New Guinea and even in the Philippines, smoked the bodies of their dead relatives to preserve them. The heat dries the body and the acidity of the smoke kills bacteria that hasten decomposition, Beckett says, and the smoke also generated formaldehyde that preserved organs. "We really wanted to study their practices for conserving mummies in a wet, tropical environment. A very challenging one," he says.

Mummies have been in scientific fashion since the Napoleonic Wars, when French researchers plumbed tombs and temples to start the study of ancient Egypt. An April 26, 1902, issue of The Lancet recounts the " Adventures of a Mummy," telling how a woman who shipped an Andean mummy to Belgium for study received damages for its decay once free of dried air. Of course, the 1922 discovery of King Tutankhamen's mummy by English archaeologist Howard Carter sparked a craze for mummies that hasn't abated since. Not coincidentally, King Tut appears on the cover of the current National Geographic.

The first computed tomography, three-dimensional X-ray, view of a mummy, came in 1977, according to a review in the current Progress in Natural Science. Since then, the field has exploded, bringing researchers ever-more exact looks inside mummified cadavers without destroying them. An upcoming study in the European Journal of Radiology led by Klaus Friedrich of Austria's Medical University Vienna, for example, features the use of such scans to diagnose tuberculosis in Andean Chachapoya mummies from 500 to 1,000 years old.

"We as a human species are extremely curious creatures, and the one thing we cannot answer scientifically is what happens after death," Beckett says. "So, when there is a mummy exhibit, people go."

Beckett and his colleagues examined mummies up close for three years on the National Geographic Channel's discontinued The Mummy Road Show program, something that has contributed to a bit of distrust in the modern reliance on X-rays.

"Mummy science has to be a team science. There are things that radiology alone can't tell you that dissection can, and that an archaeologist who understands a culture can tell you as well," he says. "By and large, a lot of good science is being done, though."

The experience in New Guinea was particularly rewarding, Beckett says, including working with a village man who hoped to be mummified himself someday, helping him to restore his father's mummy.

"The head was getting a bit loose, so we worked together and figured out how to stabilize things. I think he will be good for awhile."