Mt Scopus (Israël): Ossuaries From the Time of Jesus Discovered

Presumably from near Mt. Scopus, they found by police near the area of Neveh Yaakov

Officials say the boxes are 2,000 years old. Some are engraved with designs and even names, giving clues to their origin and contents. The boxes contain bone fragments and remnants of what experts say is pottery buried with the deceased.

The authority says the boxes were recovered last Friday in Jerusalem when police observed a suspicious nighttime transaction involving two cars, four individuals and the 11 boxes. Once police realized the boxes were of archaeological significance, they alerted the Antiquities Authority.

It is not yet clear how the suspects got hold of the boxes.

Two of the suspects are still being held and the others are under house arrest, according to the authority.

These boxes, or ossuaries, are believed to originate from the Second Temple Period. Experts say they are from within a two kilometers (1.3 mile) radius of Jerusalem.

Some of the 11 burial boxes found in Jerusalem.AFP

The Antiquities Authority already has in its possession over 1,000 of these ancient boxes. But deputy director of the authority Dr. Eitan Klein said that each box was significant. 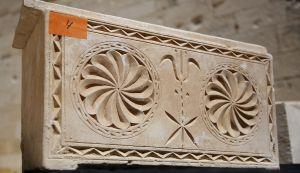 A coffin containing Jewish bones from the Second Temple period at the Rockefeller Museum in Jerusalem.AFP

"We can learn from each ossuary about a different aspect of language, art and burial practice," he said. "And we can learn about the soul of the person."

Some of the boxes feature elaborate engravings, which Klein says is indicative of wealth and a high social status of the deceased. Two were inscribed with names — Yoezer and Ralphine.

According to common Jewish practice of the time, the deceased were not buried but laid out in a cave for one year. Afterword the bones were then gathered and stored in the special boxes.

Dr. Klein offered two potential possibilities for how the sellers obtained these boxes. The first he said was that thieves had actively gone looting in an old cave. The second possibility is that a burial cave was uncovered inadvertently during a construction project or excavation.

According to Israeli antiquities law, all antiquities discovered or found within Israel are considered property of the state.

The boxes were recovered in the vicinity of the Shafat police station near the Israeli settlement of Neveh Yaakov.

Dr. Klein assumes that they originated near Mt. Scopus.

In the past, allegations of forgery have been made over certain ossuaries and their inscriptions. But Dr. Klein took careful note of their engravings and contents.
"These ossuaries are authentic," he said. "Everything here smells authentic."